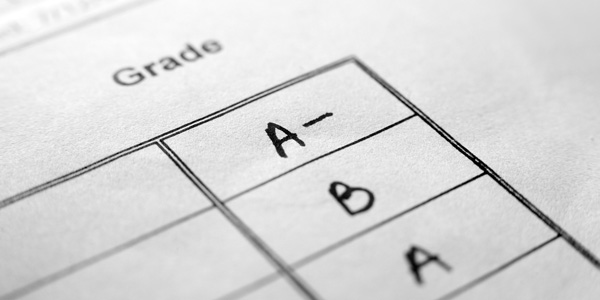 Meanwhile, household names such as State Farm, Allstate and Progressive are noticeably absent from the top 40.

More than 1,200 individual shops around the country each graded as many as 30 different insurance companies on how well each insurer’s “policies, attitude and payment practices ensure quality repairs and customer service for motorists.” 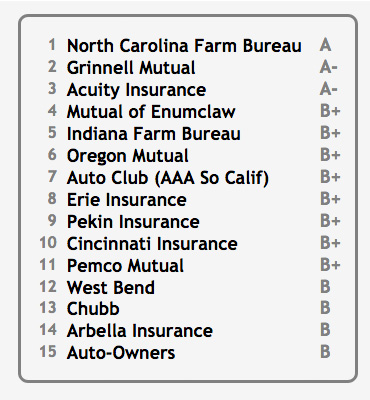 “Many consumers won’t have seen or heard advertisement after advertisement for North Carolina Farm Bureau, Grinnell Mutual or Acuity Insurance, but shops graded these companies as among the best when it comes to taking care of customers after a claim,” said John Yoswick of the CRASH Network. “You have to look fairly far down the rankings before you find one of the best-known and largest auto insurers, but most consumers will find an insurer or two among the 15 highest-graded who offer auto insurance policies in their state.”

Shops participating in the Insurer Report Card used such phrases as “cares for the customer,” “quality repair” and “easy to work with” to describe the insurers that received high marks.

When criticizing the insurers that received low grades, they used phrases such as “does not care about the quality of the repair,” “pushes us to use cheapest/lowest-quality parts available” or “inexperienced adjusters.”

“Just as medical providers see how health insurers process claims, collision repair shops interact with auto insurers on a daily basis, so we feel it’s worthwhile to ask their opinion on how well those insurers treat car owners after an accident,” Yoswick said. “We believe their views will be of interest to insurance companies and consumers.”

Of the 10 largest U.S. auto insurers – which collect 70 percent of the nation’s auto insurance premiums – USAA ranked the highest, at No. 41. The insurer received a grade of B-minus.

The rest of the Big 10 – Progressive, Allstate, American Family, Liberty Mutual and GEICO – earned C grades, all ranking below the national average. 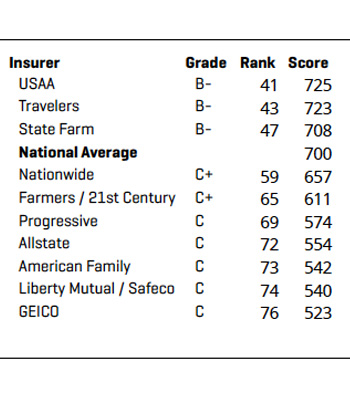 A Tool for Consumers

CRASH Network launched the survey to help consumers, “who often have little in the way of tools to help them make an informed decision about their choice of auto insurance.”

One particular challenge: Drivers on average are involved in an accident just once every 10 years, which gives them little opportunity to compare the claims service provided by one insurer over another.

“Collision repair professionals at body shops around the country, on the other hand, deal with many insurance companies on a daily basis, seeing first-hand how those companies take care of customers after an accident,” the CRASH Network explained. “They know, for example, which insurers pressure them to use cut-rate parts, which refuse to pay for repair procedures needed to ensure a high-quality repair, or which add unnecessary delays to the repair and claims process.”

Although consumers might be less familiar with the names at the top of this year’s report card, one or more of the top 15 likely offer policies in their state, the CRASH Network noted. Choosing a top-ranked regional insurer also offers consumers the opportunity to spend their insurance dollars “locally,” keeping it closer to home.