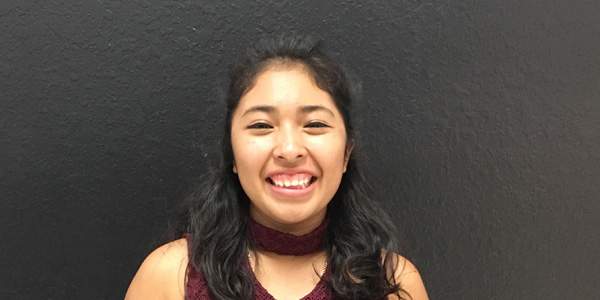 The more you learn about Rosalinda Pop-Pablo, the more you’ll want to hire her.

The more you learn about Rosalinda Pop-Pablo, the more you’ll want to hire her.

Pop-Pablo, a senior at Lorenzo Walker Technical High School in Naples, Fla., speaks three languages. She’s a straight-A student who completed her high school requirements a year ahead of schedule. And she loves collision repair.

With her high school classes out of the way, Pop-Pablo is a second-year student in the collision repair program at Lorenzo Walker Technical College (which is on the same campus as her high school), and she already is working toward her associate’s degree in business at Florida Southwestern State College.

Small wonder that the Collision Repair Education Foundation recently named her Collision Student of the Year.

“She’s a pleasure to have in my class,” said her collision repair instructor, Andy Retz, who nominated Pop-Pablo for the award. “She could, in essence, be graduated. But she came back to school just to take my class. She also came all summer just to take my class – and high school students don’t have to come in the summer at all.”

“She’s one of the most pleasant and smartest students in my class, and she’s just picked up everything as quickly as I can teach her,” he added in an interview with BodyShop Business.

‘It Just Spoke to Me’

When Pop-Pablo was a freshman, she and her classmates went on a tour of the various industrial arts programs offered at the technical college. That’s when she discovered collision repair, and her love of refinishing. “It just spoke to me,” she told BodyShop Business.

To be sure she was making the right choice, Pop-Pablo took another tour of the auto body program, this time by herself. 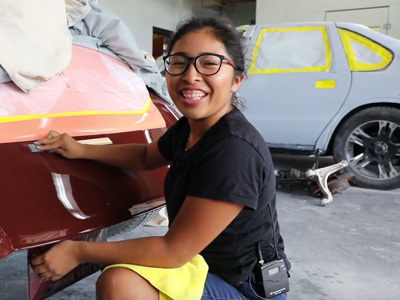 In her second year in the collision repair program, Pop-Pablo enjoys doing body work, but refinishing is her passion. The precocious painter “has a pretty good eye for it,” according to Retz, and her classmates often turn to her for help.

“She has quite a bit of self-confidence in the booth,” Retz told BodyShop Business. “It’s funny when you see a 25- or 26-year-old young man asking an 18-year-old young lady to come help him paint his car.”

Pop-Pablo is on track to complete the collision repair program at Lorenzo Walker Technical College in May 2018. When she does, she’ll be certified as an automotive collision technology technician by the college and she’ll have I-CAR Platinum Pro Level 1 status.

She hopes to complete her associate’s degree in business in 2019, with an eye on someday managing or owning a shop. But at first she’d like to work in a shop, perhaps as a painter’s helper.

“I fully would expect her to walk in and maybe be a painter in somebody else’s shop, but not for very long,” Retz said. “I think she’s a young lady who will end up owning her own shop one day, just because of her business mentality and the level of intelligence, how she picks up things right away. I think she’ll have her own shop if she wants, and she won’t be someone who gets easily pushed around.”

For Pop-Pablo, whose brother is a mechanic, being a female in a male-dominated field hasn’t been an issue at all. “Nobody’s had a problem with me so far,” she said.

Retz noted that there are two female students in his class, and neither of them has been treated any differently than anyone else. In his observation, the gender stereotypes that existed in previous generations are fading away with today’s students.

“It’s a shame it wasn’t like that 35 years ago,” Retz said. “But that’s the way things have evolved, and good for them. Good for everyone.”