The 2011 WorldSkills Championships took place Oct. 4-9 in
London and the USA was well represented.

Representing the U.S. in collision repair was Cameron
McCreery of Sterling, Colo., a student at Morgan Community College. As a
student member of SkillsUSA, McCreery earned the right to be a member of the
WorldTeam by competing and winning local, district, state and national contests
in the annual SkillsUSA Championships. The WorldSkills event takes place over a
four-day period, consists of 53 contests and involves nearly 1,000 students.

"I wanted to compete in the WorldSkills Competition
because it’s a great opportunity and a once-in-a lifetime experience,"
said McCreery. "I love working on cars. I’ve been doing it as long as I
can remember. Helping my dad work in the garage was my favorite pastime, not to
mention, I used to love playing in the grease. My dad taught me everything he
knows, and I fell in love with it and had to learn more."

Day one of the competition was set-up and diagnosis of
vehicle damage. After those steps, McCreery removed welded-on damaged
parts.

"Cameron got off to a good start," said USA
Technical Expert Terry Angel from Warren Tech in Lakewood, Colo. "He had
such a calm, positive demeanor and a great mental attitude. That served him
well over the four days of the competition."

Mark Claypool, midwest regional sales manager for Metro
Paint Supply and CEO of Optima Automotive, served again as the volunteer team
leader. Claypool has been the SkillsUSA World Team leader since 1997. Joining
Claypool this year was 17 of the best young skilled workers in America
representing trades such as collision repair, automotive service, culinary
arts, hairdressing, precision machining and web design. During the opening
ceremonies, Claypool led his team across the stage in the Olympic-style parade
of nations.

"Having sufficient numbers of qualified skilled
workers is crucial to our national economy," said Claypool, who has a
strong, lifelong dedication to workforce development. "This is why I give
two weeks of my time each year to this cause.  These young people are our future and we need so many more
of them, especially in collision repair where I work."

On Day 2 of the WorldSkills event, McCreery spent the
better part of the day grinding and doing weld preparation/clean-up from
drilling out spot welds. After that, he started to work on cutting a quarter
panel off. Once it was off, he put weld-through primer on the vehicle. He
hammered and dollied flanges, got the new quarter panel ready to install, then
started fitting up parts.

Approximately 70,000 spectators showed up to observe the
competition, including the United Kingdom’s Prime Minister David Cameron.

McCreery credits U.S. Technical Expert Terry Angel with
getting him as prepared as possible for this competition.

"Terry got me ready for this," he said.
"I’m surprised with how comfortable I felt because of this
preparation. It allowed me to
focus on the work I did."

McCreery said he was amazed at the high quality of work
his competitors did, from countries like Japan and Korea where they’ve been
training for this contest for the past 10 years.

"The speed that these competitors have, after all
this training, is impressive, too," observed Claypool. "But in
America, we can celebrate the freedom we have to choose our profession and then
pursue it, rather than the other way around."

Even so, McCreery held his own. He had a step-by-step
game plan in his head for getting the project done on time by Saturday. It was
a tall order, but his organizational skills gave him the best possible chance
of finishing on time.

"Cameron was methodical in his approach to this
contest," said Claypool. "He truly had a ‘can do’ spirit, and our
technical expert, Terry Angel, indicated that he did quite well against this
group of the best-of-the-best from around the world."

McCreery’s wife and parents arrived later in the week to
cheer him on for the final day and attended the awards ceremonies on Sunday. 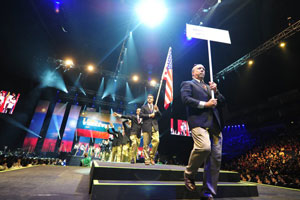 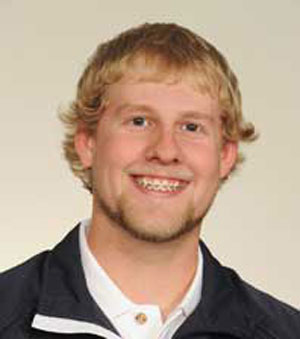 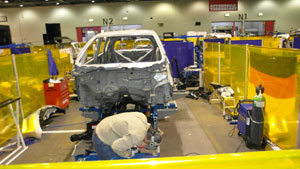 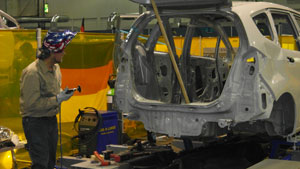