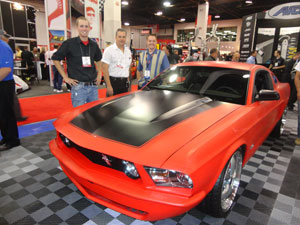 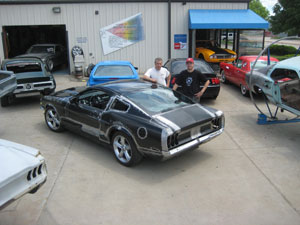 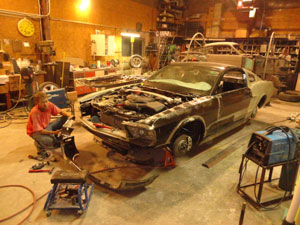 A concept Mustang presented by Dynatech at the SEMA Show held Nov. 5-8, 2011 in Las Vegas was a big hit, according to Doug Kielian, owner of Auto Kraft Body & Paint in Lincoln, Neb.

The car was hand-built by John Heermann, aka "Johnny Sparks," a 23-year-old who Kielian has groomed at his shop to become a masterful body technician.

"The car was photographed a lot at the show, with a constant flow of onlookers and camera flashes," said Kielian, a seasoned custom car builder himself. "Many of the auto industry’s movers and shakers and OEM guys stopped in for a look and approved of the concept design and build. A lot of media magazine and TV guys found us as well, and were stunned to learn who built the car."

The car is based on a 2011 Mustang GT that Heermann cut and trimmed the body sheet metal off of to make room for the classic sheet metal of a ’68 and ’69 fastback Mustang. The sheet metal was provided by Dynacorn, a company that specializes in reproducing high quality sheet metal for the restoration industry.

None of the panels were a direct fit, so they all had to endure countless hours of handcrafting to fit the body structure of the new Mustang. They then had to be carefully welded in place and finished off.

Many of the parts are hand built from scratch and bolted on as factory parts. The only panel that’s not hand-formed from sheet metal is the stock hood, which is aluminum. It was cut apart and reworked, tig welded, etc., to fit the new shape and contours of the front end.

"There was such a tremendous amount of skilled labor that went into this build that it’s hard to see since it flows so well and looks as natural as any produced car," said Kielian. "We at Auto Kraft are very proud of Johnny Sparks and his achievement and all those who have helped along the way."

Kielian is particularly proud of the young people he has developed into master craftsmen of the auto body trade.

"Auto Kraft has been training young people to become outstanding craftsmen with confidence for over 20 years, and we will continue to look to help young people pursue their dreams in becoming involved in the classic car restoration and custom car building industry," Kielian said.