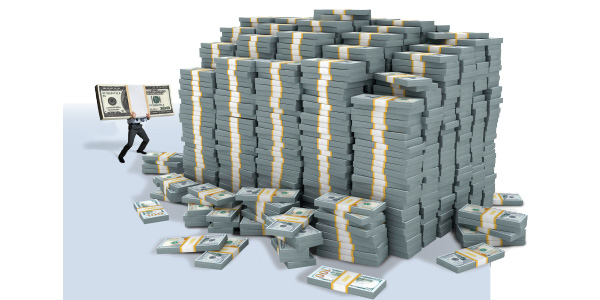 Can your shop afford a $42 million award because you let insurers interfere with your repair judgment?

By now, everyone in the collision repair industry has likely heard about the John Eagle case and the multi-million-dollar verdict a Texas jury rendered against the collision repair facility that repaired a Honda Fit contrary to Honda’s explicit repair procedures – that caused devastating burns and health problems for an unsuspecting husband and wife when the vehicle was involved in a later accident.

What is this case about? Mr. and Mrs. Seebachan purchased a used Honda Fit without knowing that the vehicle previously had its entire roof replaced due to significant hail damage. The original owners had the Fit repaired at a John Eagle facility in Texas, relying on their own insurance, State Farm. John Eagle was a State Farm DRP, and a John Eagle representative testified that it used adhesive to secure the roof panel rather than the welding Honda specified because State Farm would not pay for repairing per the OEM’s directive.

But what this case is truly about for the collision industry is about repairing customers’ vehicles responsibly. It is about the dangers and the truly terrible personal harm that repairers can cause by bowing to the economic pressures of insurers. It is about the terrible economic harm repairers can cause themselves that can likely destroy their businesses if they do not repair vehicles following the OEM directives and then those repairs result in harm to someone.

At the risk of sounding preachy, the John Eagle case is about what will result if repairers hand over their professional integrity and allow someone (or some entity) that is not qualified to perform collision repairs dictate or interfere with a blueprint for repair.

The automakers spend considerable time and money publishing information on the appropriate procedures for repairing their various vehicles. Why? Because they build vehicles and sell them to customers and desire for their customers to have good experiences with their products and hope that they continue to buy them.

To maximize those positive feelings about their vehicle products, automakers understand that their vehicles have to continue to have economic and intrinsic value to their customers. And as part of ensuring the longevity of faith in their vehicles, automakers have to ensure that customers continue to feel safe driving their vehicles and that others will wish to purchase them when this group of consumers is done using them. This naturally leads the car manufacturers to provide information to the collision repair industry about the best procedures and products to use in the repair of their vehicles. 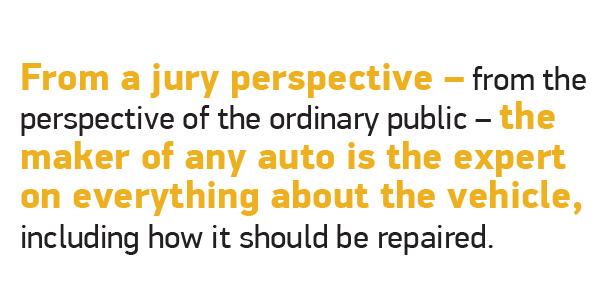 Once the OE provides the proper procedures, it is incumbent on the repairer to follow the OE’s dictates. If they don’t, it will take a great deal of effort to explain why they didn’t. As the John Eagle case showed, the jury was not impressed with the repair shop’s rationale for not following the prescribed OE procedure. From a jury perspective – from the perspective of the ordinary public – the maker of any auto is the expert on everything about the vehicle, including how it should be repaired. A professional repairer may disagree with that sentiment, because they feel they’re truly the expert on actually repairing certain vehicles, but the general public simply will not agree without a substantial amount of evidence supporting that claim. And the general public is what makes up juries.

According to the plaintiffs’ attorney, Todd Tracy, in granting the plaintiffs the entire amount of money damages they requested at trial, the jury said that it decided to make “a business decision for John Eagle.” The jury was persuaded that John Eagle had made a very bad decision by disregarding Honda’s express instructions on how to repair the Fit, which was supported by I-CAR’s directive that a repairer should follow the automaker’s repair procedures when the OE has created them. (This is the same position that was formally declared several years ago by the three major collision repair trade associations: SCRS, ASA and AASP).

This is an important reminder for collision repairers. You will be held directly and primarily accountable for all “business decisions” that you make that endanger your customers. The John Eagle jury was singularly unimpressed by “the insurer won’t pay for it” justification. The insurer is not the person or entity repairing the vehicle. You are. You hold yourselves as professional repairers capable of properly and safely repairing vehicles. People put their lives in your hands. The insurers’ arbitrary determinations concerning procedures or parts they will or won’t pay for is irrelevant to the proper and safe repair of a vehicle. You have to take a stand, or a jury will take one for you.

What Do We Do Now?

The first thing repairers should do today in light of this decision is to take out their garagekeeper’s policy and read it. Call the garage carrier (not your agent, the carrier itself) and have an in-depth conversation about what the policy covers and what it doesn’t. If they’re in a DRP relationship with any insurer, they should tell their garage carrier. Provide the carrier with a copy of the DRP document. Yes, auto carriers claim these documents are confidential, but if your garage carrier refuses to cover you for adhering to any of the terms of the agreement, then you’re 1) in big trouble already, and 2) in breach of the DRP agreement terms that state that you will maintain garage insurance for your business. Any auto carrier that asks you to sign a confidential DRP agreement and refuses to allow you to have your garage carrier or your attorney review it is not a carrier you should be doing business with. 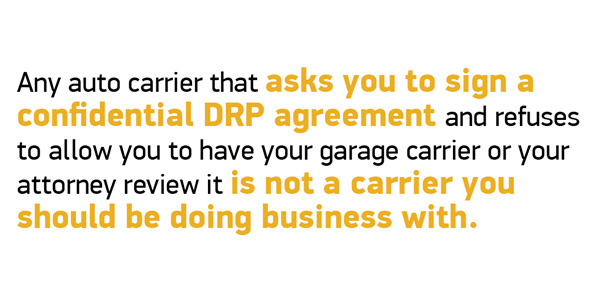 Next, repairers should ask their garage carrier about coverage and the cost of defending them in the event they ignore an OEM’s procedure dictates and they repair instead based on what an insurer believes is an appropriate procedure that it is willing to pay for. They should demand that their carrier provide the response in writing. If the carrier won’t, the repairer should report to their state’s department of insurance that their business, the insured, requested reasonable information from the carrier in writing that it refused to provide.

Also, repairers should ask their carrier if they use “captive counsel” for providing them a defense in an action. Captive counsel is a fairly recent but growing trend among insurers. Auto carriers have been forging the path of using attorneys who are actually employees of the carrier to represent their insureds. The attorneys’ firm name may be Jones and Smith, but they are, in fact, employees of X Insurance Company that is the auto carrier. Garage carriers have apparently picked up this tactic as well, as the firm that represented John Eagle in the suit was captive counsel of the carrier. (Another attorney who was not captive to the insurer joined them later in the suit and at trial). This “captive” arrangement has many lawyers and attorney ethics organizations concerned, as it raises the spectre that the attorney cannot truly be impartial in its representation of you when they’re employed by your insurer and may be rewarded in pay and bonuses for taking actions that save the carrier money but may be detrimental to you. 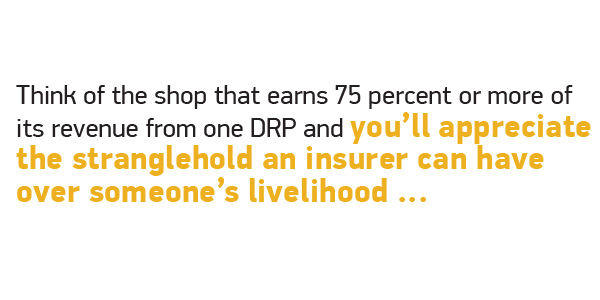 Sound familiar? Yes, captive counsel is an attorney version of the DRP. The only difference is that repairers are not actual employees of the insurer, but in other aspects, it’s the same. So think about all of those things insurers don’t want to pay for when you’re repairing a customer’s vehicle. Now realize that they’re likely doing the same thing with your defense – not hiring experts because they cost too much money, or refusing to engage in necessary discovery because of cost. All attorneys who represent insureds and are paid by the insurer face some of these pressures. But attorneys whose jobs depend on the insurer being pleased with their performances are another matter entirely. Again, think of the shop that earns 75 percent or more of its revenue from one DRP and you’ll appreciate the stranglehold an insurer can have over someone’s livelihood – and that this can lead to disastrous results.

The John Eagle case is the wake-up call the collision industry has needed to reassert itself as the professional determiner (with the guidance of the OEM) of a vehicle’s proper repair. If you don’t make wise decisions for your customers and yourselves, a jury may someday be asked to make one for you.

One of the significant questions about the John Eagle suit is, why didn’t the collision facility settle with the plaintiffs? According to Tracy, John Eagle did wish to settle the suit, but its insurer and the attorneys did not. As a result of that decision, the insurer put John Eagle in the position of going to trial – which was open to the public – and created the spectre of having an enormous judgment awarded against it and a disastrous public relations scenario for the repair facility. Tracy said that the case has now been resolved between the plaintiffs and the repair facility, meaning that plaintiffs will be paid an undisclosed sum of money and there will be no appeal.

According to Tracy, John Eagle had substantial garage coverage, so the business did not face the nightmare of having a judgment awarded against it that exceeded its coverage – which would put its business assets at risk. However, this case dealt with one repair that caused such significant harm to each of the plaintiffs that $42 million dollars was the repairer’s portion of the negligence damages. That repair could have been performed at any collision facility. So ask yourself, do you have $42 million in coverage? Most shops don’t. But this is the level of financial harm that you can cause to someone because an insurer doesn’t want to pay for repairs per OEM specifications.

This is only discussing the financial harm that can be done to a shop by failing to follow OEM procedures. There is always the criminal culpability that can follow this type of action as well. If either of the plaintiffs in the John Eagle case had died as a result of their injuries, the shop, its owners/managers and the technician who repaired the vehicle could have found themselves facing criminal charges as well. Again, ask yourself, “Is allowing the insurer’s refusal to pay for necessary procedures and thereby interfere with my damage analysis and repair plan worth killing someone and going to jail?”