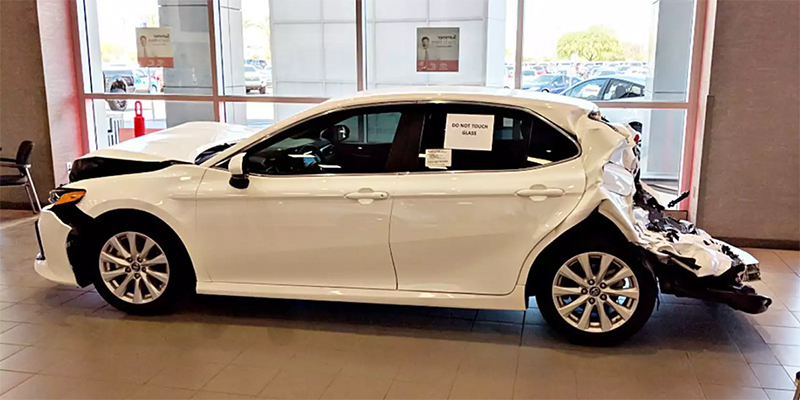 A Toyota dealership in Phoenix, Ariz., is now proudly displaying a totaled 2018 Toyota Camry LE that withstood being squashed between two semi-trucks on the freeway, according to an article by The Drive.

A Toyota dealership in Phoenix, Ariz., is now proudly displaying a totaled 2018 Toyota Camry LE that withstood being squashed between two semi-trucks on the freeway, according to an article by The Drive. The dealership employee, Ramon Suarez, was driving the vehicle to pick up a customer from the airport when he was rear-ended by a semi and propelled into another truck in front of him.

Ramon walked away from the crash with hardly a scratch and, after retrieving the vehicle from a tow yard and seeing how perfectly the car had performed, the dealership’s general manager, Lewis Goldstein, decided to display the wreck in the dealership’s showroom to make a point about the safety of the car, according to the article. The Camry’s crumple zones functioned as designed and absorbed the energy of the crash to keep the passenger cabin intact and even preserve the function of the doors, which the dealership reports all open like normal.

The 2018 Camry utilizes the Toyota New Global Architecture (TNGA) modular unibody automobile platform that has been used in various Toyota and Lexus models, starting with the fourth generation of the Prius in late 2015.

Now, the dealership takes customers to the wreck first when they ask how safe a vehicle is. The dealership even got a call from representatives at Toyota who want to fly Ramon and the wreck out to its Kentucky plant where the car was made for a celebration, according to the article.