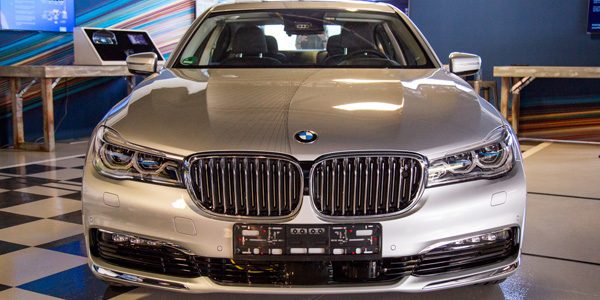 The four partners intend to jointly deploy a cooperation model to deliver and scale the developed solutions to the broader OEM automotive industry and potentially other industries.

BMW displays one of the first of approximately 40 highly automated vehicles that were announced by BMW, Intel and Mobileye during a one-day autonomous driving workshop at Intel’s Silicon Valley Center for Autonomous Driving in San Jose, Calif. (Photo courtesy of Intel)

The BMW Group, Intel and Mobileye said they plan to include Delphi as a development partner and system integrator for their autonomous driving platform.

“The four partners intend to jointly deploy a cooperation model to deliver and scale the developed solutions to the broader OEM automotive industry and potentially other industries,” the companies said in a news release.

Delphi already has provided a prototype compute platform to the BMW Group and is working together with Intel and Mobileye in the areas of perception, sensor fusion and high-performance automated driving computing.

BMW, Intel and Mobileye first announced their partnership in July 2016.

Since then, the companies have developed “a scalable architecture that can be adopted by other automotive developers and carmakers to pursue state-of-the-art designs and create differentiated brands,” they said.

“System integrators such as Delphi are critical for the go-to-market strategy of the joint solution to reach multiple automotive OEMs quickly,” the firms said in a news release.

A key role for Delphi will be the integration of the solution into OEM vehicle architectures. Additionally, Delphi also might provide required hardware components such as sensors as well as specific customization efforts and applications for differentiation, the partners said.

“From the very beginning, we designed our cooperation on a non-exclusive platform for this technology of the future,” said Klaus Fröhlich, member of the Board of Management of BMW AG for Development. “With the onboarding of Delphi, we significantly strengthen our development of the automated driving and do a future step in spreading this technology across the industry.”