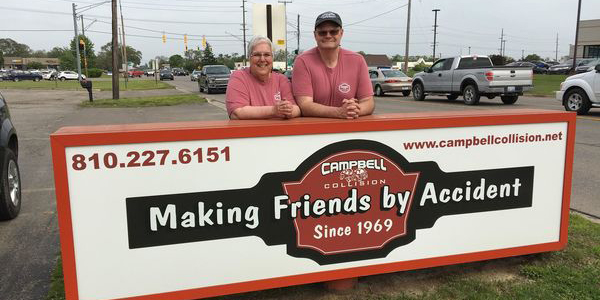 Robert Campbell said that the ideals held by Campbell Collision remain the same, even 50 years later.

A collision repair shop based in Brighton, Mich., is celebrating 50 years of serving its community, according to an article from WHMI 93.5.

Donna Campbell said they like to set themselves apart in providing quality customer care, keeping in mind what their customers are dealing with when they come to Campbell’s for help, according to the article.

Campbell Collision employs about 15 staff members at its Brighton location.

Robert Campbell said that the ideals held by Campbell Collision remain the same, even 50 years later. He and Donna joke about Campbell’s humorous but true slogan, “Making Friends by Accident since 1969,” agreeing that while the circumstances are often unfortunate, the connection they’ve made with the community is one that has and will stay with them. Donna guesses Campbell’s has at least three generations of many families they’ve fixed cars for, according to the article.

Advertisement
In this article:Detroit, local