By BodyShop Business Staff Writers
May 31, 2012 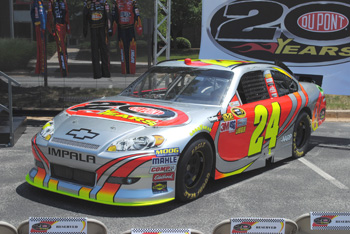 Gordon, a NASCAR legend, will drive the new Hot Hues Cosmic Dust Silver Metallic No. 24 DuPont Chevrolet in the season finale at the Homestead-Miami Speedway in Florida this November, marking his long-standing partnership with DuPont.

Gordon’s historic NASCAR Cup Series career started 20 years ago at Atlanta Motor Speedway as the young driver burst onto the scene in the rainbow-colored Hendrick Motorsports No. 24 DuPont Chevrolet.  The following season, Gordon started to take the motorsports world by storm. Now, 20 years later with four championships and 85 career victories under his belt, Gordon will race the commemorative No. 24 DuPont Chevrolet only one time at the last race of the 2012 season. Gordon, Hendrick Motorsports and DuPont are celebrating their 20th full season together – the longest current running driver/owner/sponsor partnership in NASCAR.

“I’m very fortunate to have an incredible sponsor like DuPont that has invested so much in me and this No. 24 Hendrick Motorsports team," said Gordon. "To stick with one driver and one team and to still be here with us today celebrating our 20th full season is really incredible.”

“We’re proud to have our DuPont ChromaPremier Pro paint on the No. 24 DuPont Chevrolet with one of NASCAR’s all-time greats,” said John McCool, president of DuPont Performance Coatings. “Twenty years is a unique relationship in NASCAR, and it shows that the business of racing has been good business for DuPont and our customers.”

DuPont, a global Fortune 500 company best known for brands such as DuPont Kevlar, Nomex, Teflon and Tyvek, took a chance on a young, unproven rookie driver to showcase its automotive finishes in brilliant fashion. During 20 years of sponsorship, Gordon has been recognized by DuPont as a valuable corporate asset and spokesman.

“Jeff Gordon has been the ideal ambassador for the DuPont brand for nearly two decades,” said Scott Coleman, chief marketing and sales officer for DuPont. “He is a consummate professional and a true champion both on and off the track.”

Gordon has his sights set on one thing when racing the 20th anniversary paint scheme on the No. 24 Chevrolet later this year – winning.

“I’m looking forward to hopefully taking this special DuPont 20-year paint scheme to Victory Lane in November to thank all of the amazing DuPont employees and customers who I’ve come to know like family and who have supported me loyally over the past two decades,” said Gordon.