I can’t tell you how many times I’ve heard a body shop owner complain about spending all this money to train one of his technicians, only to watch the tech take off down the street to a competitor. But never before had I heard what Doug Kielian, owner of Auto Kraft in Lincoln, Neb., told me recently:

“Competition? [Those techs] are my aids against ugly work. They’re not my competition. I call it camaraderie. I give them work when I get overloaded.”

“Aids against ugly work” – now that’s an interesting perspective. Talk about seeing the glass as half-full! What he was saying was whether his employees decide to stay with him or not, he doesn’t look at an investment in their training as a wasted thing because it’s an investment in the industry. It’s not like he enjoys seeing one of them take off, but he wouldn’t look at the time and money he invested in training them as all for naught because he just improved the industry a smidge. Whether they work at his shop, start their own shop or work at someone else’s, they’ll be that much more prepared to perform quality repairs – all because of him.

“To see young guys advance with skills and talents because they don’t need you anymore is satisfying because you know you had an impact on them and will still be having an impact in the industry, even though you’re not reaping the rewards directly anymore,” said Kielian, who is also featured in this month’s story entitled “Eureka!” (pg. 24) as inventor of the Roller Hoop. “It’s like a little bit of me is traveling on with them.”
Kielian estimates that, in more than 20 years in the collision repair industry, he has trained roughly 60 young people. They start out as paid apprentices, doing menial tasks like sweeping the floors and taking out trash.

“I tell them this ain’t no picnic,” Kielian says. “The general rule is to keep your eyes and ears open and your mouth shut. And if you’re still here in a year, we might start calling you by your name.”

Kielian usually finds the young whippersnappers at the local vo-tech school, but he says his door is open to anyone looking to be inspired.

“I might not have a job opening right then and there, but if you walk in and show a desire to gain skills and knowledge and work hard, I’ll give you a shot,” he says.

Kielian, who personally mentors all of his apprentices, says most shop owners aren’t interested in doing this because they don’t get paid for it and it requires a tremendous amount of time and expense. But Kielian, who has no children of his own, looks at these young’uns almost as if they were his own kids and takes great satisfaction in molding them into people the collision industry and the world in general can appreciate.

If it weren’t for them, he might never have come up with his rotisserie-like Roller Hoop. It was they who were less than enthusiastic when Kielian would sic them on a restoration project, whining about having to work on a yucky old car that required them to get in awkward positions. So Kielian considered it another life lesson to show them that hitching up your pants and coming up with a solution to your problem bears more fruit than just complaining about it. The inspiration goes both ways, it seems. 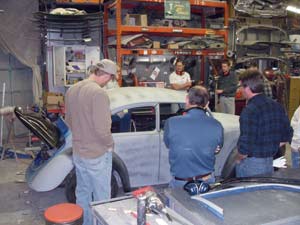