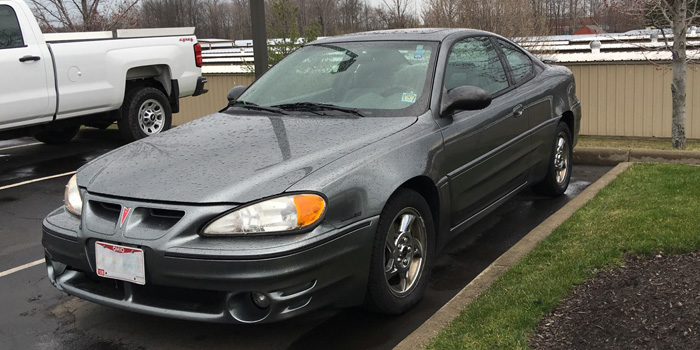 All I’ve been reading about lately is how the young people of today aren’t as interested in driving as previous generations. But I can tell you one kid who was practically doing handsprings down his driveway when his first car rolled up: my son.

Granted, he’s a car guy. He thinks it’s not a car if it doesn’t have manual transmission. He loves going to car shows and can rattle off his top five at the drop of a hat. The thought of a robot car driving him around some day makes him furious. And just like the MTV study indicated several years ago, he would gladly surrender his cellphone before his wheels.

He’s thrilled with the car he got, a 2005 Pontiac Grand Am GT Coupe, but he wants to fix some cracks in the bumper and clean the hazy headlights.

“I couldn’t live with myself if I didn’t,” he said.

Wow! I lived with a half-open window due to a busted regulator for over a year once!

Of course, I’m going to help him with these fix-ups, which will present some nice father-son bonding time and an educational experience to boot. He can’t wait to detail it and talked about wanting to make the rims shine like new.

He also just landed his first job as a busboy at a restaurant, and he’s attacking the plates and silverware and cups with a zeal I’ve never seen before, as the car has given him a renewed purpose to pay his car insurance and loan every month.

“Everybody has to earn money to pay for the things they love, so I’m glad you’re learning,” I told him.

The other day, he took me for a test drive. As we eased out of my parents’ bucolic enclave and headed toward a main drag, he said rather sinisterly, “Wanna see what it can do?” What made it worse was that he didn’t turn his head to me at all; at most, he cocked an eye at me to see my reaction.

This was what I feared! That his raging hormones and teenaged boy bravado was going to wrap this car around a telephone pole!

We got onto the main road and he punched the gas, and I felt the front of the car rise as we lurched forward. I think there were probably finger impressions on my legs long after the ride was over. As we headed back to my parents’ house, he said, “Think I should do that with Papa Terry?”