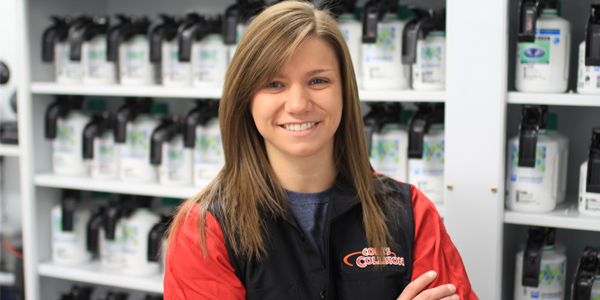 When people told Kayla Boyland she wasn’t going to make it in the collision repair industry, she put her head down and kept working, eventually being named the head painter at a five-location MSO in New York.

When Kayla Boyland entered the collision repair industry in 2013, she admits it was initially a rough go. She had only attended Hudson Valley Community College in Troy, NY, for one year because, at the end of that first year, a shop offered her a full-time job she couldn’t pass up.

“I didn’t know much, so it was a little intimidating having a bunch of guys telling me what to do,” she says. “I had a lot of people telling me I wasn’t going to make it or be able to handle anything. As I kept going, I was able to put my foot down and have a say in everything, and with that I came to be more respected. You learn to adapt, and now it’s just another day for me.”

Flash forward five years, and Boyland, 23, is now the head painter at Cole’s Collision Centers’ North Greenbush location in the Capital Region of New York. She started off as a prepper, but as soon as she was hired, she told management that she wanted to work her way up to painter.

“After I proved I could be a good prepper, they would give me a little more leeway and let me paint a thing or two,” Boyland says. “I kept proving my point and eventually became the head painter.”

Today, Boyland serves as her own prepper, which is the way she likes it.

“I’m very critical of how I want my things done, so having someone prep for me is harder for me to get things done the way I want,” she says.

Because she is so meticulous about her work, Boyland says that redos in her world are very rare, but if they do occur, it’s usually a color match issue. More complex refinishes today are just one of many challenges she faces.

“I have noticed a lot more tri-coat colors coming into the business – whites, blues, reds, grays – when before it was only whites that were tri-coat.”

The aspect of her job she finds most enjoyable is producing quality work – seeing a quality repair come down to her, and a quality paint job coming out of the booth.

“I put pride into every job I do,” says Boyland. “Keeping the booth clean and my area clean and my paint jobs coming out clean is something I enjoy seeing.”

Boyland, who grew up in Clifton Park, NY, had always been around cars since she was a kid. In fact, her grandfather at one point had been an auto body painter. In high school, she set about restoring a 1984 Ford Ranger, doing a lot of the bodywork herself, learning through trial and error.

When Boyland went off to vo-tech school, her teacher had her do a lot of painting.

“He said, ‘You know, you’re good at this,’” Boyland says. “Painting was something I liked doing, so I thought, I can make money dong something I like, so that motivated me to do more.”

Boyland enjoys working for an MSO because “the pay is better, the workflow is better, and I’m guaranteed to always have work in my hand and not be sitting around doing nothing,” she says. But she still feels there is a place for single-store mom-and-pop shops.

“There are a lot of people who don’t want to go through an insurance job, but [the mom-and-pop shops] won’t make as much money as an MSO where everything is going through the insurance company. Insurers are trying to weed out little shops and don’t want to send customers to little shops, is what I’ve noticed.”

Boyland has taken PPG and I-CAR training, among others, but is not content to believe she already knows it all and further training would be a waste of time.

Boyland’s advice to females who would like to work in the auto body trade one day is: don’t ever let anyone tell you that you can’t do it.

“You have to motivate yourself and show everyone that you know what you know so you don’t get walked all over by other males in the business who think they know it all,” she says.

General advice Boyland has for any young person looking to start a career in collision is: don’t get discouraged when you mess something up.

“I’ve seen a lot of people come in as apprentices who think they’re going to fail,” she says. “I’ve told a lot of people you’re not a failure till you quit. Learn from your mistakes – don’t quit because of one little setback.”

Boyland feels the main reason for young people’s lack of interest in the auto body trade is pure laziness.

“I was always driven to be a worker, and from what I’ve seen, there are a lot of younger people who don’t want to work and aren’t motivated to get up and be a hard worker. They want to sit at a desk job and not do much. The younger generation is kind of getting lazy.”

Still, she does hold an optimistic view of the future, based on the long careers she has seen people have in collision.

“I’ve noticed it’s hard to find new people [to come into the collision repair industry], but people who are here tend to stay till they retire. I definitely do worry about the amount of people coming into the industry and keeping things going, but right now, with the people we have, we’re going to do the best we can to train the people coming in to be good quality workers just like we have here now.”

“We always hire the player, not the position,” says Cole. “Those who are willing to learn and work hard, like Kayla, are opening new career paths for themselves and helping us grow as a company.”

Nice to Know – a Q & A with Kayla Boyland

When you leave work, what’s your favorite thing to do?
I love to work out!

Can you share a personal or professional goal you’ve set for yourself?
It’s a goal of mine to flip real estate properties and eventually own multiple income properties.

What is one of your favorite quotes?
“Love yourself, be yourself and shine among those who never believed you could.”

What is one of your guilty pleasures?
Stewart’s ice cream!