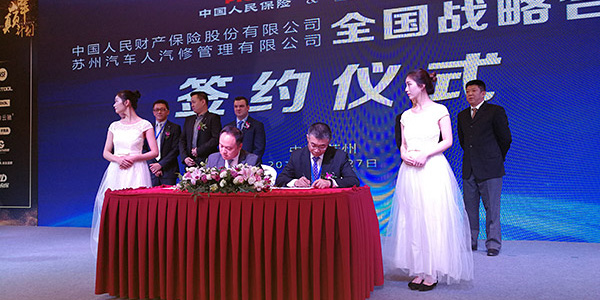 Fix Auto China and the People’s Insurance Co. of China (PICC) have signed a partnership agreement that is the first step in developing a formal direct repair program with the insurer, Fix Auto said.

Fix Auto China and the People’s Insurance Co. of China (PICC) have signed a partnership agreement that is the first step in developing a formal direct repair program with the insurer, Fix Auto said.

The agreement was announced at Fix Auto China’s inaugural national conference in Suzhou.

One year after the launch of Fix Auto China’s initial network of 78 locations in December 2016, the brand has doubled its footprint in China, with 156 independently owned collision repair franchise locations across the country.

“This strategic cooperative agreement, by which PICC recognizes Fix Auto as a national network and Fix Auto commits to delivering standard repair service, quality and rates, is the first of its kind for Fix Auto China,” the company said. “This partnership is an important preliminary step in developing a formal direct repair program with PICC, which could include referrals to Fix Auto locations.”

Founded in Beijing in 1949 and handling approximately 20 million automotive claims annually, PICC is China’s largest provider of casualty insurance and has an extensive history of delivering client-centric insurance services to the Chinese population, according to Fix Auto China.

Liu added: “Fix Auto and PICC share a culture based on quality service and customer focus and we are proud to enter in this partnership with them. We believe our model and high standards of quality and ethics make this agreement a natural fit and we look forward to growing our partnership with PICC over time.”

“This strategic agreement with the nation’s largest insurance provider not only underscores Fix Auto’s promise to grow strong insurance partnerships for its network through operational consistency, but places Fix Auto in a position to deliver reliable service to even more customers in China. Congratulations to Fix Auto China on this significant achievement,” Leal said.

Advertisement
In this article:China, People’s Insurance Co. of China