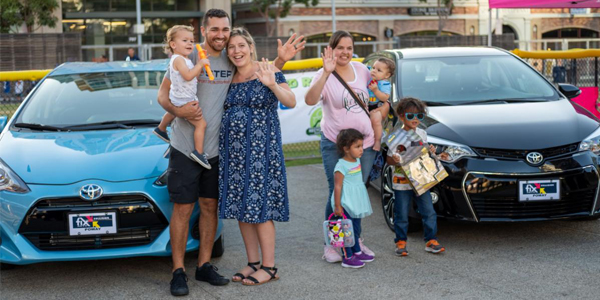 Fix Auto Poway announced that it teamed up with GEICO to provide two deserving families with new vehicles, a 2016 Toyota Prius and a 2016 Toyota Corolla.

Fix Auto Poway announced that it teamed up with GEICO to provide two deserving families with new vehicles, a 2016 Toyota Prius and a 2016 Toyota Corolla. Both vehicles were both fully refurbished at Fix Auto Poway, which is locally owned and operated by long-time San Diego resident Gary Leger.

The presentation took place at a recent San Diego Padres game and was broadcasted in-stadium and on Fox Sports.

Kenny H., nominated by STEP (Support the Enlisted Project), received the 2016 Toyota Prius, and his wife will soon welcome their second child. Kenny, who is currently enlisted in the Navy, will be medically discharged and will require this vehicle to help plan the family’s next steps.

Letticia J., also nominated by STEP, is also currently enlisted in the Navy and has recently assumed financial responsibilities for a close friend and the father of her three children, which has placed her in a difficult financial situation. Letticia received the 2016 Toyota Corolla, which will alleviate the burden of her current vehicle’s lease, allowing her additional financial freedom.

The gifting ceremony was part of the National Auto Body Council’s (NABC) Recycled Rides initiative, an inter-industry community awareness project that provides vehicles to those in need. GEICO donated the vehicles, which were then turned over to Fix Auto Poway who performed the necessary repairs free of charge. A number of local vendors contributed the replacement parts needed to finish the job, making it a true community effort.

“We are delighted to be a part of such a great program that helps so many people,” said Greg Jacobi, regional vice president of GEICO. “In 2018, GEICO donated 91 vehicles countrywide. Military service members were among our first customers. We are deeply honored to present these vehicles to show our appreciation and to celebrate the many sacrifices and contributions these families have made.”

Added Fix Auto Poway Franchise Partner Gary Leger, “I’ve always felt that we owe those who selflessly serve our country a debt of gratitude. So, when the opportunity came up to provide two military families with new cars, my entire team leapt at the opportunity to do so. They’ve served us, so it was only appropriate for us to take a moment and serve them. NABC’s mission is to show the benevolent side of our industry and provide a lifeline to deserving households. On behalf of my entire organization and those who graciously contributed, it was an absolute honor to provide these two local families with safe and reliable transportation.”

News: CIECA Webinar: How Body Shops are Addressing the Coronavirus