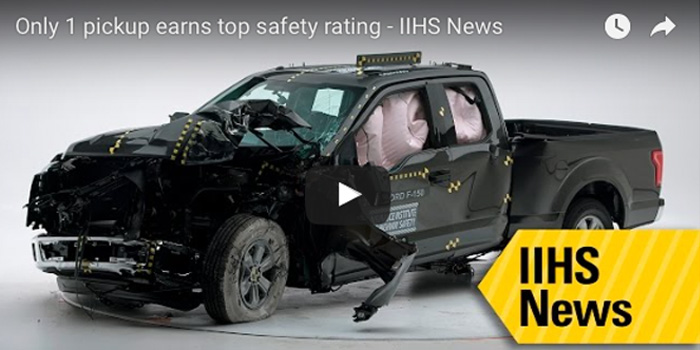 In the Insurance Institute for Highway Safety’s test, three out of seven large pickup trucks earned an acceptable or higher rating for occupant protection in a small overlap front crash.

The Insurance Institute for Highway Safety (IIHS) announced that three out of seven large pickup trucks IIHS evaluated in a new round of crash tests earned an acceptable or higher rating for occupant protection in a small overlap front crash.

IIHS last year decided it would test the two most popular variants of large pickups instead of just one after discovering that the Ford F-150 extended cab, known as the SuperCab, lacked structural countermeasures that helped the crew cab, known as the SuperCrew, earn the top rating of good in the small overlap test. The test replicates what happens when a vehicle runs off the road and hits a tree or pole or clips another vehicle that has crossed the center line.

Ford improved the 2016 model F-150 SuperCab to clinch a good rating in the small overlap crash test, up from the 2015 model’s marginal rating. The F-150 is the only large pickup in the latest test group to earn the Institute’s top rating in the test. It joins the F-150 SuperCrew in earning a 2016 TOP SAFETY PICK award when equipped with Ford’s optional basic-rated forward collision warning system.

Vehicles that earn a basic rating for front crash prevention plus good ratings in the small overlap front, moderate overlap front, side, roof strength and head restraint evaluations qualify for TOP SAFETY PICK. To qualify for 2016 TOP SAFETY PICK+, a vehicle must earn good ratings in the five crashworthiness tests and an advanced or superior rating for front crash prevention.

“Ford is leading the way among large pickup manufacturers when it comes to protecting people in a range of crashes and offering technology to warn drivers of imminent frontal crashes,” said Raul Arbelaez, vice president of the Institute’s Vehicle Research Center. “We commend Ford for taking last year’s test results to heart and upgrading protection for SuperCab occupants in small overlap crashes.”

IIHS observed differences in performance between the extended-cab and crew-cab versions of two other pickups. The Chevrolet Silverado 1500 Double Cab and the Toyota Tundra Double Cab both earned an acceptable rating for occupant protection in a small overlap crash. Survival space for the driver in both of these extended-cab pickups was maintained reasonably well overall, contributing to their acceptable ratings for structure. 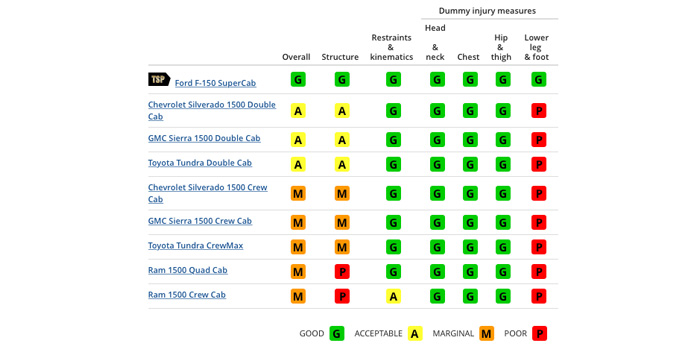 The story was different for the larger crew cabs. The Silverado 1500 Crew Cab and the Tundra CrewMax earn a marginal rating in the small overlap front test. Both models had considerable intrusion into the occupant compartment that compromised survival space for the driver.

Ratings for both of the Silverado pickups extend to their GMC Sierra 1500 twins.

The worst-performing pickups in the small overlap test are the Ram 1500 Crew Cab and the Ram 1500 Quad Cab. Both earn a marginal rating overall and a poor rating for structure. The force of the crash pushed the door-hinge pillar, instrument panel and steering column back toward the driver dummy. In the Ram Crew Cab test, the dummy’s head contacted the front airbag but rolled around the left side as the steering column moved to the right, allowing the head to approach the intruding windshield pillar. 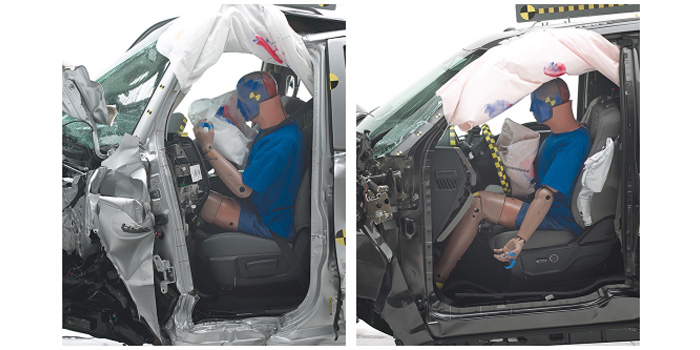 There was extensive occupant compartment intrusion in the Ram 1500 Quad Cab (left), resulting in a poor rating for structure. In contrast, survival space was well-maintained in the Ford F-150 Supercab (right).

All of the pickups except the F-150 had moderate to severe intrusion into the driver footwell area during the small overlap test. The footrest/left toepan, brake pedal, parking brake and/or lower dashboard were shoved against the dummy’s lower legs. In the worst cases (Ram Crew Cab and Ram Quad Cab), maximum intrusion reached 16 to 17 inches. Measures taken from the crash test dummy in all but the F-150 indicated a likelihood of serious lower leg, ankle and foot injuries.

“Drivers in these pickups would need help freeing their legs from the wreckage following a small overlap crash,” said Arbelaez. “We encourage manufacturers to redesign their pickups to resist intrusion in the lower occupant compartment to safeguard people from serious leg and foot injuries that might require months of rehabilitation.”

Across the board, the large pickups earned good ratings in the moderate overlap front test, side test and head restraint evaluations.

That wasn’t the case for roof strength. Four pickups earned good ratings for occupant protection in a rollover crash: the F-150, both Silverados and Tundra Double Cab. The Tundra CrewMax is rated acceptable, and both of the Ram 1500s are rated marginal. The Institute launched its roof-strength ratings program in 2009.

Keeping the roof from collapsing when a vehicle rolls over is particularly important in pickups because 44 percent of occupant deaths in pickups are in rollovers. Stronger roofs crush less, reducing the risk that people will be injured by contact with the roof itself.

Stronger roofs also can prevent occupants, especially those who aren’t using safety belts, from being ejected through windows, windshields or doors that have broken or opened. Pickup truck occupants are the least likely to buckle up among all vehicle occupants. In 2014, 77 percent of pickup occupants were observed using belts, compared with 89 percent of people in vans and SUVs and 88 percent in cars.

Besides the F-150, the Silverados and their GMC Sierra twins are the only other pickups available with an optional forward collision warning system that earns a basic rating for front crash prevention.

IIHS plans to test the redesigned 2016 Nissan Titan and Honda Ridgeline later this year. The 2015 Titan Crew Cab is rated good in the moderate overlap front test, acceptable for roof strength and good for head restraints. The Ridgeline was last sold as a 2014 model. It earns good ratings in the moderate overlap front, side, roof strength test and head restraint evaluations.