In the wake of the John Eagle Collision Center verdict, Ford Motor Co. commissioned an independent test of two frequently replaced F-150 aftermarket crash parts to determine if they would meet the automaker’s “dimensional design specifications.”

In the wake of the John Eagle Collision Center verdict, Ford Motor Co. commissioned an independent test of two frequently replaced F-150 aftermarket crash parts to determine if they would meet the automaker’s “dimensional design specifications.”

The answer, according to Ford, “was a resounding ‘no.’”

The independent test lab conducted laser scans of an aftermarket aluminum hood and several front-bumper brackets for the 2012 Ford F-150, according to the automaker.

“The results show the non-OEM hood was not dimensionally compatible to Ford design specifications, with numerous substantial measurement deviations resulting in an uneven surface,” Ford explains in its latest On Target publication for collision repairers and Ford and Lincoln wholesalers.

A graphic of the aftermarket parts’ degree of deviation shows “peaks and valleys several millimeters outside of the Ford specification.” The front-bumper brackets show “significant deviations from Ford specifications” for guidehole locations and their length, as well as “fluctuations in the curvature of the bracket wall in numerous areas,” according to the automaker. 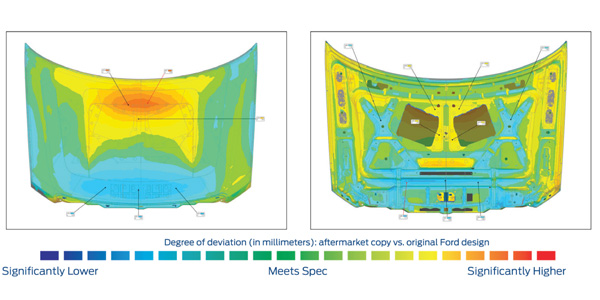 “These variations are quite substantial,” says Larry Coan, Ford Customer Service Division (FCSD) collision product manager. “Collision repair shops are able to work with very slight part variations, but not significant deviations like these that are off by several millimeters.”

The aftermarket parts’ deviations from Ford design specs can lead to longer repair times and higher costs, the automaker asserts, and can have a negative affect on the vehicle’s performance in a subsequent collision.

“All components of the vehicle structure are designed and tested to work together in a real-world collision,” says FCSD Collision Product Team Manager Lisa Fournier. “Any significant deviations from engineering specifications, such as changes in materials, forming processes, dimensional inaccuracies and any structural differences, along with how it is repaired, can dramatically alter the crash characteristics of a vehicle.”

In a separate On Target article, Ford comments on Todd Tracy’s recent crash tests in which a vehicle fitted with aftermarket parts and a vehicle with a glued-on roof performed poorly compared to an unmodified vehicle.

“The results serve to reinforce the importance of repairers researching and using OEM repair procedures every time, and that even slight changes in materials or deviation from proper procedures can have severe consequences,” Ford concludes.

AkzoNobel, Dave Kindig to Partner Once Again at SEMA Show