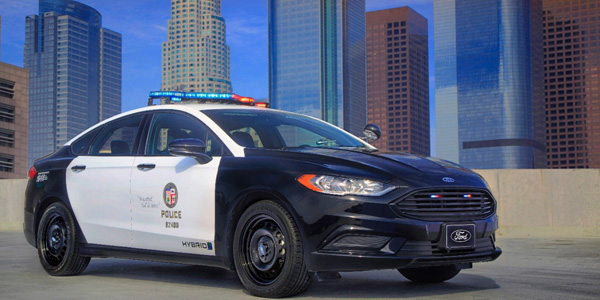 The Ford Police Responder Hybrid Sedan is the second of 13 new electric vehicles that the automaker plans to introduce in the next five years.

Ford has unveiled what it said is the industry’s first pursuit-rated hybrid police car.

The Ford Police Responder Hybrid Sedan is the second of 13 new electric vehicles that the automaker plans to introduce in the next five years.

“Electrifying our next generation of vehicles is core to our unwavering commitment to sustainability,” said Joe Hinrichs, Ford president, The Americas. “By being a leader in electrified vehicles, we remain committed to delivering cars, trucks and SUVs that are better not only for our customers, but for the environment and society as well.”

Ford is positioning itself as “an auto and mobility company,” and is investing heavily in electric and self-driving vehicles. A recent report gave the automaker high marks for its work on developing driverless technology.

Ford said it expects sales of hybrids, plug-in hybrids and fully electric vehicles to dramatically increase during the next decade.

Ford sells the most police vehicles in the United States, with a 63 percent market share, according to the automaker.

The Police Responder Hybrid Sedan is projected to provide an EPA-estimated 38 miles per gallon – more than twice as fuel-efficient as today’s 3.7-liter V6 Police Interceptor, which gets 18 mpg combined. Final EPA-estimated ratings are not yet available.

The new vehicle will be the first hybrid sedan with full pursuit capabilities, according to Ford. That means the car is certified by police agencies to be tough enough to handle police pursuits for longer periods at different speeds and over obstacles such as curbs and flooded intersections.

The Police Responder Hybrid Sedan uses an Atkinson-cycle 2-liter engine with an electric motor fed by an advanced lithium-ion battery. The hybrid is calibrated for law enforcement’s unique duty cycle and will run in battery-only mode up to 60 mph. The car automatically switches to maximum performance – with the engine and battery working at peak acceleration levels – when needed.

The Police Responder Hybrid Sedan can be ordered this spring and will be delivered to police departments nationwide next summer.

This year, Ford also is testing a fleet of 20 Transit Connect hybrid taxi and van prototypes in demanding traffic conditions in New York and several other major U.S. cities.

OEMs: Mercedes-Benz to Go All Electric by 2030