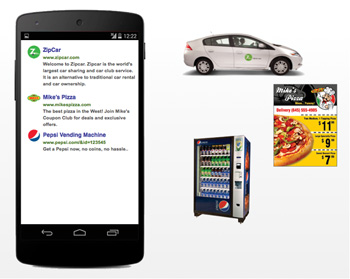 Optima Automotive employs people who are charged with being what we call “futurists.” They’re responsible for keeping their eyes open for the dreams and long-term plans of the movers and shakers in technology. They look for what’s out there in the future, not what’s available today or announced to be available in six months. So, with that in mind, are you ready to hear about the most revolutionary thing that’s coming? It’s a Google initiative called the Physical Web, and it’s totally cool!

Imagine a future world where you’re walking down a city street and you suddenly crave an Italian beef sandwich. You pull out your smartphone and type in or narrate “Italian beef sandwich” into the Physical Web project. A ranked list of search results comes up, you pick one and it opens in a full-screen browser window as a URL Web page.

Wait…isn’t that what we can do now with search engines? Yes, but these results I’m talking about in the future will be coming to you via smart devices located near you. These smart devices will have the ability, via Bluetooth broadcasting, to “beacon” their information out to their local area, reaching you when you reach out to the Physical Web for information.

Local businesses will have the opportunity to showcase products and services. Bus stops will be able to tell you when the next bus on your route will arrive. You’ll be able to pay parking fees directly from your phone. Vending machines will give you nutritional information on the products you’re thinking of buying. And you won’t need cash to buy them –  your phone will pay what you owe when you select what you want. You’ll be able to walk up to a movie theater and get movie times, reviews, buy tickets and more. You’ll be able to rent a ZipCar and pay for it based on where they’re parked. And so much more – all without having to download an app. Everything will be just a simple tap away.

If you’re like me, you’re probably worried that you’ll be walking down the street and get bombarded by buzzing alerts for this product, that dessert or some service. Not to worry, say the developers. The core principle of this system will be no proactive notifications. You’ll only see what you ask for.

One of the things you can ask for – if you want – is to receive “push notifications” where you approve getting messages from merchants you want to hear from. When do those donuts from this morning go on sale this afternoon? What’s today’s lunch special at your favorite diner? Also, the beacon works one-way, so these broadcasting devices won’t have the ability to receive any information from your phone.

Another concern is that you could be tracked. However, given the fact that these are Bluetooth broadcasts, the user’s smart devices would be gathering information without actually connecting to the beacons. Tracking isn’t possible. But, once the user clicks on the URL in a search result, they will then be known to that particular website.

The Physical Web isn’t owned by any particular corporation, though Google is behind it. It’s being created as “open source” so that the technology will be available to anyone, and during the development stages everyone is encouraged to experiment with it and provide developers with feedback. It’s currently being tested and is set up as an app, but the final version won’t be an app, per se. Rather, it will just be standard on all smart-phones and tablets someday. Apple has something to say about that, however, and is taking steps to create its own iBeacon system and other app concepts. Apple never met an idea it didn’t try to re-engineer and call its own!

Cisco predicts that there will be 50 billion smart “gadgets” by the year 2020. Intel estimates that number at 15 billion in 2015, so the explosion of smart devices will change everything in the next five years as we communicate with these via our smartphones, tablets and wearable devices. Can implants be far away?

To see the Physical Web today in its experimental form and start testing it for yourself, check it out: bit.ly/1pcCrOU. It’s early, so there won’t be much broadcasting going on just yet, but that’s going to change.

It’s time to brainstorm how you might use the Physical Web in your business. Towing companies could broadcast from busy intersections where collisions happen frequently. Body shops could promote their detailing services. Mechanical shops could promote their oil change and tire services, and broadcast wait times for state inspections. You could provide customers with an opportunity to review what makes your business special while they’re in your waiting room. The world as we know it will be changing. Let’s be ready together!