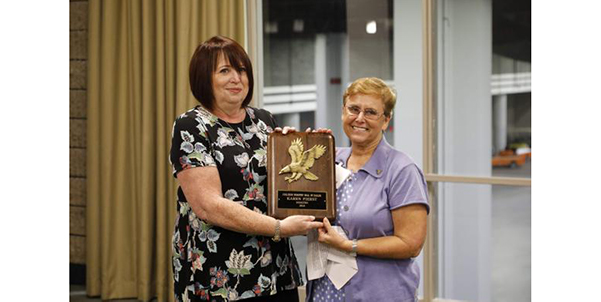 Fierst, founder of KerenOr Consultants, and Wano, president of GW & Son Auto Body Inc., were inducted Aug. 7 at a ceremony that was attended by more than 100 industry professionals at the Georgia World Congress Center in Atlanta, Ga.

Karen Fierst (right) was inducted into the Hall of Eagles by 2010 inductee Stacy Bartnik.

The Collision Industry Hall of Eagles announced that its 2018 inductees are Karen Fierst and Gary Wano. The two industry leaders were inducted Aug. 7 during a ceremony that was attended by more than 100 industry professionals at the Georgia World Congress Center in Atlanta, Ga.

The Hall of Eagles, the collision industry’s Hall of Fame, honors exceptional individuals whose long-term efforts have reached beyond their jobs and self-interest to make significant contributions towards the betterment of the industry. 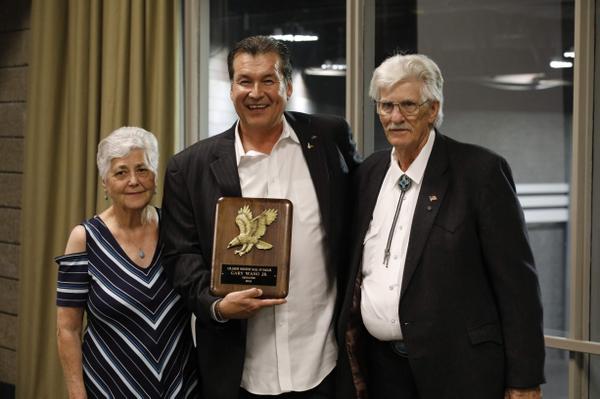 Gary Wano (center) was inducted into the Hall of Eagles by 2002 inductees Margo and Bob Smith.

Wano is president of GW & Son Auto Body Inc., a family owned and operated business, with three locations in Oklahoma. A second-generation collision repairer, Wano has been active in numerous industry associations and non-profits throughout his career. Wano is a past chairman of the Society of Collision Repair Specialists (SCRS), and has also served as president of the Oklahoma Auto Body Association.

Wano has served in leadership positions on numerous committees and boards throughout his career including the CIC, Collision Industry Electronic Commerce Association (CIECA), NABC and I-CAR.

Since its creation in 1989, the Hall of Eagles has been viewed as the most prestigious honor any collision industry professional can receive. Each year, only a select few distinguished individuals are inducted into the Hall of Eagles through the nominations and vote of two-thirds of the currently active members of the Hall.

For more information on the Hall of Eagles, visit hallofeagles.org

Advertisement
In this article:cic, cieca, hall of eagles, I-CAR, NABC