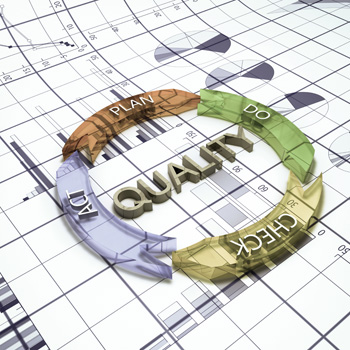 Asking the question, “Why are the cars waiting all the time?” prompted a decade of process improvement at Craftsman Auto Body in Leesburg, Va.

About 10 years ago, the shop hired its first lean consultant. Paul Krauss, president and CEO of the third-generation family business, said the company was “plugging away fixing cars well, and we thought we did everything right.”

“I didn’t ‘get’ cycle time over a decade ago,” Krauss says, noting that the company cut cycle time in half after bringing in an outside professional to analyze this key metric and tease out the efficiencies of every component in the repair process. Ten years ago, the company’s average cycle time was about 12 days, matching the industry average at the time. Today, the cycle time across 11 stores is 6.6 days.
“We did touch time studies and asked, ‘Why are we waiting?’ And while there were some external factors, most of the factors were self-inflicted,” Krauss says. “Either we weren’t expediting parts procurement or we had our blueprint process out of whack and there wasn’t urgency in the right departments. By and large, we took a look in the mirror and said, ‘Let’s do a better job.’”

That’s the question shops must ask today to compete and win business from insurers, run a profitable business and satisfy customers – since cycle time is inextricably related to customer satisfaction.

Cycle time improves the customer experience – people want everything yesterday, and so efficiency (coupled with communication) pleases consumers. And insurers are, as always, keeping a close eye on cycle time as they look to reduce costs and raise the bar on delivery time. Shops with fast cycle time and high CSI win business.
“If you’re fixing cars faster than your competition, it’s definitely a plus,” says Joey Amodei III, manager at The Collision Centers of New York.

Amodei says cycle time is “a tough balancing act,” with one insurer requiring a rigorous four-day turnaround. “And it’s not easy to sustain that. It really isn’t,” Amodei says.

But as a DRP for five out of the six major insurers, Amodei says The Collision Centers of New York is held accountable for cycle time and is responsible for ensuring the utmost efficiency at every point in the cycle.

That’s where measuring cycle time is critical to success. As the saying goes, if you can measure it, you can manage it. Cycle time is complicated with many influencing factors: technician efficiency, equipment and tools, parts, scheduling and quality control. Shops that are positioned for success are breaking down the repair process, measuring every component in the repair process and retooling areas that are a drag on cycle time.

The “whole” cycle time is the sum of its parts. Breaking down cycle time to analyze performance every time a vehicle is touched helps shops identify time-sucks. The Collision Centers of New York tracks cycle time by every segment in the repair process.

“This is the best way for us to see where the bottlenecks are and where we need to focus our attention,” Amodei says.

Cycle time can be broken down to measure vehicle drop-off to estimate completion, parts order to received time, booth cycle time and so on. The Collision Centers runs daily, weekly and monthly reports for its three locations (soon to be four).

“When we run these reports, we review them and we can drill down and see what we need to improve,” Amodei says.

Krauss also breaks out components of the repair cycle to analyze performance, but he says his rental car company’s Length of Rental (LOR) report “is the cleanest way” to measure cycle time.

“We can carve up the numbers any way we want, but we’ll end this month with about 1,000 rentals, and that gives us a really good-sized sample of what we’re doing to lower the expense for the insurance partner,” he says.

The LOR report is a significant factor insurers consider. “If we’re talking about saving $80 to $90 a claim in rental car expenses [because of faster cycle time], that’s a big deal to any insurer out there,” Krauss says.

Dick DeLaere, controller at Autobody USA in Kalamazoo, Mich., measures cycle time based on total hours on a job divided by the number of days the vehicle is in the shop’s possession. That’s essentially a keys-to-keys measurement, and the company’s management system tracks the numbers.

“We’ll order a bumper and pre-paint so when the part comes in, it can be put on the car and the vehicle will go out in one to two days instead of three to four,” he says.
Adding a combo tech has helped move smaller jobs through Autobody USA’s shops faster. Sometimes, a step can be eliminated from the process – the combo tech can do body work, prep the car and move it to the paint department. Afterwards, he can put back door handles or other components that were removed. Also, better blueprinting has been paramount to keeping cycle time in check, DeLaere adds.

At The Collision Centers of New York, car delivery is under consideration as solutions for decreasing delivery time.

“We’re very drilled into our LOR report, so we’re looking for any opportunity where we can possibly bring customers’ completed vehicles back to them, take the rental back to our facility as a convenience to the customer and cut one to two days out of the cycle time,” Amodei says.

Extended hours are another option. “We have an arrival and delivery report where we can see the quantity of cars we take in on any given day of the week, and we can see the hot days where customers are picking up and consider extending our hours on those days – or extending hours on other days to push more cars out.”

At Craftsman Auto Body, having too many vehicles on site was a problem. Plus, supplement percentages were lackluster and the parts expediting process was lagging.

“We thought we were doing really well, but knowing now what I know today, we really weren’t doing that many things right back then,” Krauss says.

The process is ongoing – it’s continuous improvement, Krauss adds. His shop analyzes reports to identify components of cycle time, then tackles one problem at a time, pinpointing the cause of the problem, developing processes, training the team and ingraining the process into the culture. Improving cycle time is a long-term commitment and culture shift, not a ticker on a to-do list, Krauss says.

Scheduling is also critical to improving cycle time. On a bad winter day, cars towed into Autobody USA may sit for a few days before an estimator can get to them, DeLaere says.

“When you look at keys-to-keys cycle time, [cars sitting around] drag down your time,” he says, relating that the company works to keep open slots for “surprises” but there’s nothing easy about adjusting a schedule on the fly to accommodate tow-ins.

Scheduling permeates cycle time, extending from drop-off to estimating to delivery.
“It’s a balancing act,” says DeLaere. “And we find that one of the biggest deterrents to good cycle time is having too many vehicles on site, because a technician can only touch one vehicle at a time.”

Areas where shops can improve cycle time include blueprinting – spending more time up front to ensure a smoother repair process – and parts handling, which is essentially the first step to a solid blueprint process. When a single parts order can be made – with no acceptance of orders that aren’t completely fulfilled – shops can avoid the explanation to insurers or customers that they’re “waiting on a part.”

Amodei says his company is holding a vendor meeting to express their importance in the overall business and in meeting cycle time requirements.

“You need to have a strategy of ‘all-hands-on-deck,’” he says. “That means having all of our people on board, including and our partners and parts vendors. It takes a collective team effort.”

At every stop in the repair process when a vehicle is touched, there’s an opportunity to improve the process. That’s the mindset progressive shops adopt, and a key to securing insurer business and staying competitive.

“I would say insurers are probably leveraging off the better performing [shops], so if someone is faster, you either get better or pay for it,” Krauss says.

Improving cycle time is not just for the auto body industry, Krauss points out. The concept applies to every service business, from hospitals to restaurants.

“I think some shops haven’t realized that this is happening everywhere, not just in collision repair,” he says. “The consumers’ expectations are going up, and we have to be able to meet those.”

“Cycle time is important to insurers because they’re renting cars, and every day they have to pay for a rental is expensive to them,” DeLaere says.

Is cycle time the most important KPI? Not necessarily. But it’s awfully hard to separate cycle time from other performance measurements, including customer communication and delivery time. There’s a direct correlation between cycle time and CSI score.

Lower cycle time at Craftsman Auto Body helped retool the entire organization, and the faster turnaround can be credited for CSI scores today that exceed industry averages, Krauss says. Craftsman’s quality score is 9.7 out of 10, and its communication score with the Audit Checks National Average is 98 percent.

“It’s not the extra things we do, but because we can turn around the cars faster,” Krauss says, noting that the company’s on-time delivery score is 94 percent. “We think that customers sense our urgency,” he says.

“We measure all of those KPIs to make sure we aren’t pushing too hard or cutting corners, and I think all of this is related to developing a better process around throughput,” Krauss adds. “That ultimately makes the product to the consumer better.”

Kristen Hampshire is a freelance writer based in Cleveland, Ohio.

Advertisement
In this article:cycle time, MSO

Hitting for the Cycle