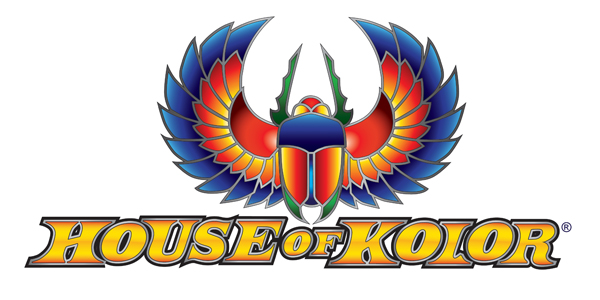 House of Kolor announced it will launch four new custom colors inspired by industry greats, alongside House of Kolor’s new “Icons of Kolor,” at the SEMA Show in Las Vegas on Tuesday, Oct. 31.

House of Kolor announced it will launch four new custom colors inspired by industry greats, alongside House of Kolor’s new “Icons of Kolor,” at the SEMA Show in Las Vegas on Tuesday, Oct. 31 at 9:30 a.m. in booth no. 23513 in the Central Hall of the Las Vegas Convention Center.

“This is not only our way of recognizing iconic leaders in custom, it’s also our way of saying ‘thank you’ for their individual contributions to the industry,” says Craig Robatzek, business director, House of Kolor. “There is not a single element of today’s custom and refinish industry that was not been shaped by their influence.”

All of these signature new colors will be available exclusively through preferred House of Kolor jobber distributors.

Deep reddish-orange hues inspired by none-other-than Jon Kosmoski, the founder of House of Kolor paint. One of the most well-known custom painters in the world, Kosmoski is often seen on TV as part of “Biker-Build-Off” or at seminars held all over the country sharing his endless knowledge about custom paint and application.

A bold and vibrant purple inspired by Gene Winfield, whose work has been seen on the silver screen. Winfield has been creating custom work since returning from World War II; by the mid-1960s, his innovative designs had caught the attention of the film community, resulting in many on-screen features including “Blade Runner” and “RoboCop.” Today, he continues to build in his Mojave, Calif., shop.

A deep, dark shade of red named after Art Himsl, one of the most recognized customizers working today. Himsl has spent 50 years creating unique designs and winning awards, hall of fame memberships and designations, including the House of Kolor 2005 Prestigious Painter Award. His most notable contribution to the industry is a 1937 Zeppelin Roadliner.

An electric orange co-created with one of the most prolific custom builders of all time – Darryl Starbird. Starbird is well-known for his futuristic space-age designs, often featuring bubble tops. Some of his best-known work includes the Predicta, the Electra and Lil Coffin. Starbird is the founder of the National Rod and Custom Car Hall of Fame Museum in Afton, Okla.

For more information on House of Kolor, visit www.houseofkolor.com.

Advertisement
In this article:House of Kolor, SEMA Show

House of Kolor to Honor Industry Icons at SEMA 2017