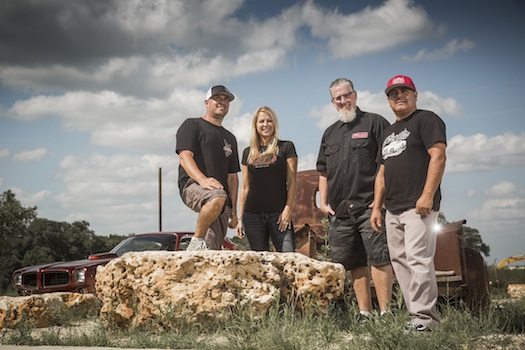 House of Kolor by Valspar will host the cast of Velocity Channel’s hit series “Iron Resurrection” on Tuesday, Nov. 1st from 1 to 2 p.m. and Wednesday, Nov. 2nd from 11 a.m. to noon in the House of Kolor booth no. 23513 at the 2016 SEMA Show in Las Vegas. The SEMA Show will take place Nov. 1-4 at the Las Vegas Convention Center.

The show’s stars, Joe and Amanda Martin, Jayson “Shag” Arrington, painter Javier “Shorty” Ponce and their team at Martin Bros. Customs use House of Kolor products to breathe new life into vehicles of all kinds.

“At Martin Bros., we make a big statement with our builds, knocking out the ugly and bringing in the cool,” said Joe Martin, owner of Martin Bros. Customs. “House of Kolor brand products make it easy to bring these builds to life. We couldn’t be more excited to be sharing what we do with the products we love at the SEMA Show this year.”

“Iron Resurrection” premiered on The Velocity Channel in April 2016 and was an instant hit with viewers.

“The crew of ‘Iron Resurrection’ is known for their incredible builds and outstanding craftsmanship,” said Gina Mahan, brand manager — House of Kolor. “We are proud to not only be their feature paint brand, but to host them at the biggest trade show of the year.”

House of Kolor is celebrating its 60th anniversary this year with the launch of a redesigned website, custom colors and memorabilia. This year’s Prestigious Painter winners will also be announced during SEMA; stay tuned to their social media channels to find the winners.

The House of Kolor booth will also hold four vehicle builds, including the Martin Bros. Mustang featured on the show. Five new custom colors will be announced, and the new 2016 color book and the 2017 calendar will be on display throughout the show. Visitors can also see live airbrushing demos and try out the digital paint booth.