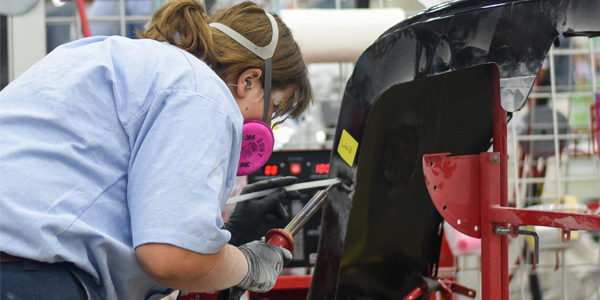 In the collision industry, women make up 3.6 percent of the workforce, according to the Bureau of Labor Statistics (2017). How can the industry attract more women?

In the collision industry, women make up 3.6 percent of the workforce, according to the Bureau of Labor Statistics (2017). This is certainly a number that is inching higher, but with such big fish to fry, like getting new employees of any gender through the door, it’s easy to lose sight of the details. By details, I mean what women have to offer the industry.

Recently, I was frequently getting asked how shops could get more women into in the industry – as if being a woman gave me the insights and answers they were looking for. So I set out looking for an answer to a question that, I found out, has not one solution but many.

What Are the Trends?

Despite the slow drip of woman techs entering the industry, there is an area of collision repair that has historically been female-dominated: administrative work. Before, many people, women included, looked at office manager roles as static positions. But in recent years, there has been a change in how some employers view such a role.

“I see more women in the industry now than ever before; I see more moving up into management and executive positions,” said Debbie Menz, strategic account manager for Axalta Coatings Systems and co-chair of the Scholarship Committee for the Women’s Industry Network (WIN). “When I started, the only women were either delivery drivers for paint distributors or the office girls. Since working with WIN, we have the pleasure of working with many men that want to learn how to recruit and retain women in the collision repair industry. This shows us that the industry is continuing to accept women in many different positions and seeing their importance to the industry.”

David Goldstein, chief talent officer for Caliber Collision, said he has noticed a similar shift in women from the administrative to leadership roles. 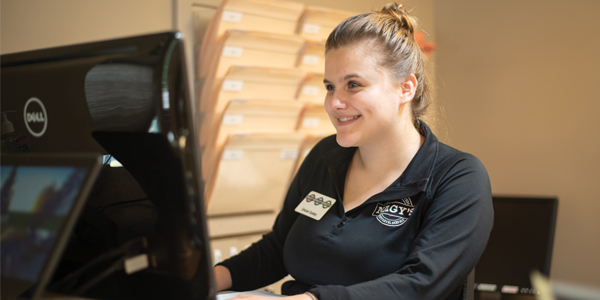 “I really do feel like there’s a shift now where the industry requires more than just administrative skills but also back-end experience and good leadership skills,” said Goldstein. “And with the growth of MSOs, it’s opened the door for more talent and different opportunities for women to get into the industry.”

Goldstein said that while there are some cases where women come into the business through customer service and administrative roles and transition to being techs, it’s been much more common to see women move towards being estimators, service advisors or hold other management positions.

It’s a trend that Roni Gill, a regional manager with Caliber, said isn’t solely due to women not understanding the work or having training but that not everyone wants to get their hands dirty, regardless if they’re eager or not to learn new skills. Many of their female techs come from outside recruiting instead of internal movement.

Not being interested in becoming a body tech or painter doesn’t mean they wouldn’t benefit from learning more about how the back of the shop operates. Goldstein said one of the things they’re focusing on at Caliber is altering their training plans so those who come into administrative roles have options when it comes to learning more about the collision industry.

Lots of shops talk about recruiting more women, but if they aren’t giving them a reason to stay or working to develop their skills, it will likely lead to a high turnover rate. It’s a two-step process that takes some work, but the payoff means more valuable and reliable employees. (This really goes for any employees you hire, but more specifically for women since they’re the ones usually feeling as though they’re pigeonholed into certain roles.)

At 17, Gill began answering phones at a large shop in Southern Califorinia. Thirty-two years later, she found herself as the co-owner of several shops before selling to Caliber and becoming a general manager.

“I really credit a lot to my mentor in that first shop,” said Gill. “He just saw something in me and kept pushing me and sending me to training and teaching me. And eventually I became a minority owner in that facility.”

Shea Rodriguez, a shop manager with Caliber, said she feels like one of the biggest things shops need to do is to start the conversation about opportunities, because even if a woman has potential, they might not ever ask about more if they don’t know there is more.

“Every man or woman has their strengths and weaknesses, and enabling a strength based off gender is not only holding that person back but it is not allowing full potential to what could be,” said Rodriguez.

Gill said that while there’s a lot of people hiring women in the industry, they’re mostly only looking at them to sit at the front desk or run an office as if they can’t do anything else.

“We’re not looking for someone that just wants to stay at the front desk, and we don’t even have the conversation that way,” said Gill. “During the interview process, I’m asking them, ‘Where do you see yourself then?’ And “Do you think you’d be interested in estimating?’ We’re already setting the expectation that you can do whatever you want from the first meeting, but I don’t think everybody’s had that mindset.”

In the past year, Caliber has been developing an internal “women in operations” leadership group to further support women within their company and help them advance their careers, a group that both Gill and Rodriguez helped to found. In addition, Goldstein said the group guides the company to where it can improve in helping them succeed. 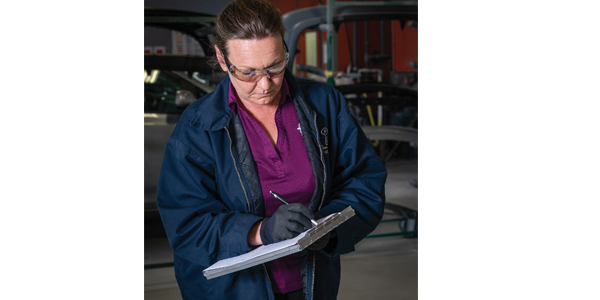 “We wanted to understand their journey and how we can participate in creating that path for other women in the administrative end of the business to continue to advance,” said Goldstein. “We’ve gathered a lot of great feedback and a lot of direction, and I’m really listening to what they need. For instance, what we’ve been hearing is that we need to create a clear path for the next generation to understanding the repair process and production side when they come from the administrative end.”

Rodriguez agrees that back-of-house knowledge not only helps enable women do their job better and advance but it also helps to build confidence that they belong in the industry too by being able to continually learn in the shop.

“If I want to learn something, I go out there and I’ll just get my hands dirty and learn it,” said Rodriguez. “You can have someone that’s worked on cars their entire life, but now with this new technology it’s completely different. So to me it’s almost like an even playing field.”

“We want to empower them,” added Gill. “Find out what’s working, what’s not working, what were their roadblocks to get where they are and how can they help us remove roadblocks for the next level of women to come up.”

Understanding the Challenges and Changing

While some women will struggle through advancing in the industry, some haven’t experienced as much resistance because no one shop is the same. But both Gill and Rodriguez agree that creating a healthy culture in your shop where all employees can feel supported and encouraged is a big step in the right direction.

“I really humbled myself when I came into this role,” said Rodriguez. “My first day as a center manager, I walk into the shop and one of my body men said, ‘I need a core support,’ and I was like, ‘Give me a second, let me Google core support,’ because I had no clue. And ever since then the guys have really kind of taken me in and I’ll go out there and I’ll get my hands dirty or I’ll ask, ‘Hey, how do I do that?’ It was just all about communicating.”

While Gill said she never felt like anything was holding her back, she did experience some bias from customers who refused to have an estimate written by her. It didn’t phase her, but she wishes she would have spoken a little louder about what she wanted and went for it from day one.

What can the industry do to help? Read on.

Take a Chance on Your Employees

They might need some more training, but invest in the right person and you’ll be impressed. The most important part, though, is that you follow through with your commitment to mentor someone and rise to the challenge, whether it’s training a new tech or helping an employee move up the ranks.

“I think what we’ve experienced with shops is that even if they give them a chance, sometimes the shop isn’t necessarily always prepared to disseminate the work to their skill level,” said Amber Ritter, COO of the Collision Career Institute. “So things might take them longer and shops get frustrated with them and think, ‘Oh, they can’t actually do anything.’”

Ritter suggests shops give employees in general the opportunities for little home runs as they build their skill set and become more successful team members. She said the institute uses an 80-to-20 ratio to utilize skills the employee already has but also learn more through new experiences.

By giving your employees a plan, they’re able to visualize and understand, and that goes a long way. What are my options? What is my earning potential? How can I work to get there? How long will it take?

“We believe that people definitely will work harder for opportunity than they necessarily will for wages off the bat,” said Ritter. “I think men and women, but especially women because it’s a non-traditional industry for them, benefit when they can see a roadmap for them to be able to focus on their goals.”

Be a Mentor and Create a Support System

Offer them help and guide them through the collision industry. Foster learning and push them out of their comfort zones. The goal here is to not only develop their talent but have them succeed enough to become a mentor themselves and continue to pull more women up to the next level.

Don’t forget to connect them with other women in the industry to lean on and learn from. Groups like WIN help drive the future of collision repair by attracting, developing and advancing women through education and connections in the industry.

“We want our members, and women not in the organization yet, to thrive and to change how this industry is seen,” said WIN’s Menz. “We have been able to become an educational resource for women in the industry by creating webinars, national and regional conferences about all areas of collision repair employment, management and industry trends.”

Everyone needs role models. There’s no better way to visualize yourself doing something than to watch someone you admire succeed at it.

Goldstein added, “I think when you see someone that’s been there, it’s a lot easier to follow something where you’ve seen the trial and errors and the success stories.”

How Can Auto Body Shops Attract More Women to the Industry?

OSHA Fines: Got a Million Dollars to Spare?
Connect with us