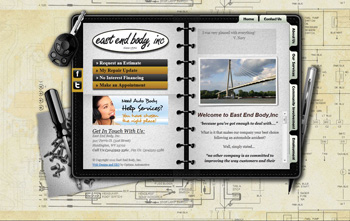 Joe Doddridge, owner of East End Body Shop in Huntington, W. Va., admits he can’t get out of his own way sometimes. A second generation shop owner in his 30s, he digs deep into all facets of his business. He reads everything he can get his hands on that may help him run his shop, and he shares what he learns with staff. Yet his staff aren’t usually as excited as he his about change and new ideas. But this is common, according to Michael Gerber’s “The E-Myth Revisited.”

Sometimes Doddridge gets bogged down in the details of things. This paralysis by analysis can slow progress – and it slowed down the process of building East End’s new website, too.

About a year ago, Doddridge decided it was time for a new website. The first, from the early 2000s, was simply a picture of East End’s building, its address and phone number. The second version was created around five years ago. At that time, Doddridge wanted something simple and generic.

The old site was doing okay in search rankings, but because it wasn’t lighting the world on fire, Doddridge decided he wanted to have a fresh, new, out-of-the-box look. Their developer did an analysis that revealed they were lagging behind in search rankings compared to their competitors. A new, fully optimized design would address this issue and drive more traffic to his site.

New Design
The process of designing the new site began. Doddridge told his developer what he wanted. Designs were created and submitted for review and, hopefully, approval.

“The pitfall is having a vision of the website and then getting bogged down in the process,” he said. “I wish I had just turned it over to the professionals so the process would move along.”

As a result, it took nearly a year to complete, but finally www.eastendbodyshop.com was reborn.They hit upon a new design, something radically different and non-traditional for a body shop website. Everyone loved it, so the design was converted to XHTML, the programming language many developers use for website development. The website is also built in WordPress so the East End team can easily update it on their own.

Doddridge’s team submitted content suggestions, and the site came together. The new design has the look and feel of a leather notebook and is superimposed over a schematic. The navigation buttons are like notebook page tabs. The calls to action are on the upper left side of the notebook: “Request an Estimate,” a status update, “Make an Appointment” and Facebook and Twitter links. Below that is the “Get in Touch With Us” section. These calls to action help get visitors to do something once they land on the site.

Professional Image
Once Doddridge stepped aside, the development moved rather quickly.

“It came down to wanting to project a professional image in the market as a collision repair shop,” he says. “Our industry doesn’t have the cleanest image, so we wanted to project that. I really like the interactive features and our value propositions on the site. I think it’s a good look, has some really cool features on it like ‘Request an Estimate,’ the CCC repair update system we use and the employment tab. Our employees were excited to see the new website up and online. Everybody I talked to in the shop gave us positive feedback on the look.”

The site has been live long enough that search engines are now indexing it and ranking it. East End’s rankings are way up in Huntington and in their surrounding towns, and they have lots of “page ones” and many “position ones.”

Their next move is to set up a Google+ account to help boost their Google rankings a bit more. Read more about this in next month’s column.

Enhanced Rankings
Enhanced rankings means more people are finding East End. Google Analytics tells us that they’re getting as much of 77 percent of their website traffic from searches, meaning people are indeed finding them. It’s no surprise when you look at their enhanced rankings. People are viewing more than three pages per visit, compared to the industry average of 1.7 pages. The average time on the site went from less than a minute to nearly three and a half. That’s quality traffic!

So, the hunt for website visitors in Huntington bagged a trophy…quality traffic and more cars to fix.

BSB Contributing Editor Mark Claypool has nearly 30 years of experience in workforce development, business/education partnerships, apprenticeships and Web presence management. He’s the CEO of Optima Automotive (optimaautomotive.com), which provides website design, development, search engine optimization (SEO) services and social media management services. He’s also the director of business development for Metro Paint Supplies in Chicago. His work history includes vice president of VeriFacts Automotive, founder of Mentors At Work (now a division of  VeriFacts), executive director of the I-CAR Education Foundation and the NABC, co-founder of the Collision Industry Foundation and national director of development for SkillsUSA. He served, on a volunteer basis, as the SkillsUSA World Team Leader for the WorldSkills Championships.