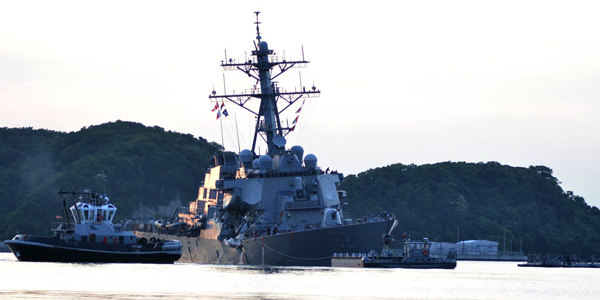 Huntington Ingalls Industries soon will begin the daunting task of repairing the USS Fitzgerald, a U.S. Navy destroyer that was damaged in a June 17 collision with the merchant vessel ACX Crystal. Seven sailors died in the collision.

Huntington Ingalls Industries soon will begin the daunting task of repairing the USS Fitzgerald, a U.S. Navy destroyer that was damaged in a June 17 collision with the merchant vessel ACX Crystal. Seven sailors died in the collision.

The guided-missile destroyer will be transported to the Pascagoula, Miss., shipyard of Ingalls Shipbuilding, a division of Newport News, Va.-based Huntington Ingalls.

“Ingalls and all of its employees regret the tragic circumstances that will bring the ship to Pascagoula,” said Ingalls Shipbuilding President Brian Cuccias. “But it is an honor and a privilege to work with the Navy to return the ship to the fleet in the shortest time possible.”

Although the Bath Iron Works division of General Dynamics built the USS Fitzgerald in 1993, the Navy said it chose Huntington Ingalls to repair the destroyer because its Pascagoula shipyard “has the available capacity to restore USS Fitzgerald to full operational status in the shortest period of time with minimal disruption to ongoing repair and new construction work.”

“Given the complexity of the work and the significant unknowns of the restoration, the Navy determined that only an Arleigh Burke-class shipbuilder could perform the effort,” the Navy’s U.S. Pacific Fleet said. 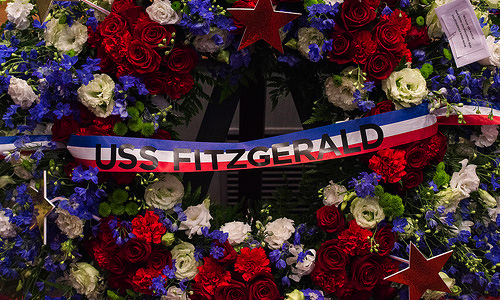 Huntington Ingalls has a history of repairing damaged Navy ships, including the frigate USS Stark and USS Cole, the latter of which is a guided-missile destroyer in the same class as the Fitzgerald.

The 505-foot USS Fitzgerald currently resides at the U.S. Naval Ship Repair Facility and Japan Regional Maintenance Center in Yokosuka, Japan. The Navy said it is evaluating proposals for a contract to transport the USS Fitzgerald to the United States.

The USS Fitzgerald, named after the late Lt. William Fitzgerald for his heroism in the Vietnam War, “suffered damage on her starboard side above and below the waterline,” according to the Navy.

“Compartments that were affected include two berthing spaces, a radio room, a machinery space and various lockers, passageways and access trunks,” the Navy said.

In addition to repairing the collision damage, the Navy plans to have Huntington Ingalls implement “previously planned modernization efforts” that had been scheduled to take place in 2019.