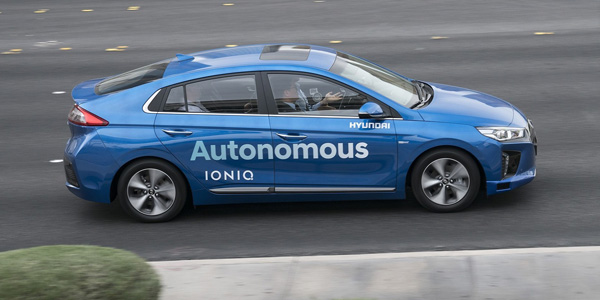 Hyundai and the self-driving-tech firm Aurora announced a strategic partnership to bring self-driving Hyundai vehicles to market by 2021.

Hyundai and the self-driving-tech firm Aurora announced a strategic partnership to bring self-driving Hyundai vehicles to market by 2021.

The partnership will incorporate Aurora’s self-driving technology into Hyundai vehicles starting with models custom-developed and launched in test programs and pilot cities, according to the companies.

Over the longer term, Hyundai and Aurora will try to commercialize self-driving vehicles worldwide.

To start, the partnership will focus on the ongoing development of hardware and software for automated and autonomous driving and the back-end data services required for Level 4 automation, according to the companies. Level 4 autonomous vehicles defined by SAE can operate without human input or oversight under select conditions.

The goal of the partnership is to deploy autonomous driving quickly, broadly and safely, the companies said.

“We know the future of transportation is autonomous, and autonomous driving technology needs to be proven in the real-world to accelerate deployment in a safe and scalable manner,” said Woong Chul Yang, vice chairman of Hyundai Motor. “Combining our advanced vehicle technology that embeds the latest safety features with Aurora’s leading suite of Level 4 autonomous technology will advance this revolution in mobility with Hyundai in a leadership position.”

In the United States, Hyundai began testing autonomous vehicles on public roads in 2015, after obtaining a license fromy the state of Nevada. At the 2017 CES, Hyundai advanced its trials in urban environments, demonstrating self-driving technologies to the public with its autonomous IONIQ models.

Hyundai’s new-generation fuel-cell vehicle, which will make its global debut at CES 2018 in Las Vegas, will become the first model to be utilized in the test processes starting this year, according to the automaker.

The fuel-cell powertrain will offer an ideal platform to implement autonomous driving technologies, which requires a massive amount of power to support the large amount of data communication as well as the operation of sensors and other hardware, Hyundai said. The hydrogen-powered fuel-cell vehicle will be able to provide a stable electric power supply without concerns about driving range, according to the automaker.

Aurora, which has offices in Silicon Valley and Pittsburgh, has “spearheaded the self-driving revolution, building teams and pioneering modern machine learning techniques now on the cusp of transforming transportation,” according to the company.

“Aurora is excited to partner with Hyundai Motor to make the social benefits of self-driving available globally,” said Chris Urmson, CEO of Aurora. “This partnership combines Hyundai’s strengths in vehicle design, safety and manufacturing with Aurora’s expertise in self-driving technologies to make a positive difference in the world.”

Advertisement
In this article:CES 2018, Hyundai, technology

New Book Published for Collision Repair Managers
Connect with us