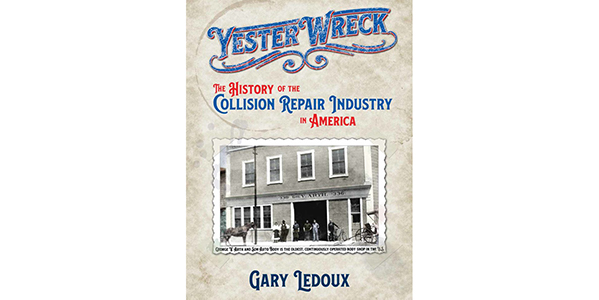 Collision industry veteran Gary Ledoux has announced the launch of his new book, “YesterWreck: The History of the Collision Repair Industry in America,” which covers more than 100 years of automotive history.

Collision industry veteran Gary Ledoux has announced the launch of his new book, “YesterWreck: The History of the Collision Repair Industry in America.” The book’s 13 chapters and 850-plus pages, together with approximately 60 photos and illustrations, cover more than 100 years of automotive history with the emphasis on the collision repair side of the business.

“Many people, even some of those in the industry, don’t realize that many of the companies that serve the industry today had their beginnings in the horse and buggy days,” said Ledoux. “Sikkens paint has been around since 1792. The DuPont Company (now Axalta) has been operating in the U.S. since the early 1800s. AkzoNobel had its start in The Netherlands in 1835. In the 1880s, Joseph Binks and Dr. Allen DeVilbiss independently started toying with the idea of a spray gun capable of spraying paint.”

Each chapter covers a decade of the people, events and technology that helped move the industry forward – from the earliest brush-on automotive finishes in the 1920s, to the advent of the first auto body associations and industry periodicals in the 1940s, 50s and 60s. The book covers the creation of such industry mainstays as NACE, CIC and SCRS in the 1980s, the explosion of the computer age in the 1990s and how it affected shops, and the now-infamous John Eagle decision of October 2017.

The book also includes a number of historical industry statistics. Current followers of the industry will see many names they know, and some they may have only heard of. Industry leaders started emerging in the 1940s, gained more recognition in the 60s and exploded in the 80s.

The book is available in two versions: a limited-edition hard-cover version that is numbered and signed by the author, and a paperback version. It can be ordered through the author’s website at www.yesterwreck.com

Author Gary Ledoux spent almost 50 years in the automotive business, starting at an auto parts PBE jobber in his native New Hampshire. The last 29 years of his career was spent at American Honda, the last 12 of those years spent on the collision side of the business where, among other duties, he administered that OE’s body shop certification program. Ledoux retired in October 2017 and now works part-time as a freelance journalist.

CIECA to Hold Webinar on Cybersecurity
Connect with us