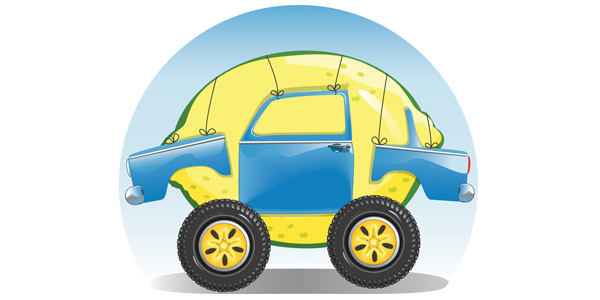 As a PB&E jobber in the 1970s, Mark Clark learned that rust ruled in used car body shops, and there were several degrees of cheap.

When I started in our industry in 1970, my average body shop customer owned minimal equipment. Many shops had a homemade spraybooth to paint in and a favorite tree stump to pull from. Everybody had a set of tanks and torches to cut and braze, and most had a stick welder for the thick stuff. No one owned a wire welder. Very few owned centering gauges or even a basic tram gauge to measure damage; they used tape measures and hopeful guesses.

I recall joining one of my customers on a trip to the local steel supplier while he looked for a steel rod straight enough to serve as the tram gauge he intended to build. Lots of the technicians then were World War II veterans and tended to fabricate their own specialty tools rather than buy a new one from me. As sparsely equipped as my typical collision shop customer was, the used car body shops made do with smoke and mirrors (and a magnet).

Back then, cost was the No. 1, No. 2 and No. 3 criteria in refurbishing used cars. This was decades before automotive coatings were flexible enough to make PDR (paintless dent repair) possible, and used car repairs primarily centered around rust damage.

In the midwest, where we salted the winter streets liberally, corrosion ruled the entire industry. Before vehicle manufacturers galvanized steel (added a layer of zinc that corrodes faster with moisture and oxygen than iron does) or applied moisture-tight epoxy primers with electricity, they just let it rust away. Legitimate rust repairs often required completely replacing the worst panels. In fact, it was the super-speedy rust-outs on 1970s Chevrolet truck fenders that caused the birth of today’s entire aftermarket crash parts industry – a story for another column.

Legitimate corrosion repairs were time-consuming, expensive and often didn’t stop the car from rusting away anyway. Illegitimate repairs were the order of the day in all my used car shops. Often just one or two guys in the cheapest, out-of-the-way building they could rent, these used car shops had the potential to buy lots of paint from me. In those days, the typical used car refinish repair was a complete. For a little more labor time and lots less skill, they could paint the whole car in less time than blending (say what?) away a mismatch. Just dip it and be done. The only trick from my end was getting paid for all that paint before the wind blew them to another cheap space down the road in the middle of the night.

As you know, when some movie directors want to set the scene for a bad neighborhood, there’s nothing like a pawn shop, a tattoo parlor and a body shop to send the shady spaces message. I’d like to think we’re past that image with most of today’s consumers, but my old used car customers helped earn that reputation.

Not every crash part had a bill of sale with it. One guy in a nearby rural town would buy builders (total-loss cars) one week and by the next time I came by, he’d often magically have exactly all the used parts he’d need to fix his builder – all the same color and clearly from the same donor car. I have no doubt that somewhere in the area, there was a stolen and stripped car missing those very same parts. One of the two local cops hung out in the shop, and if he didn’t care, neither did I.

There were several degrees of cheap in the old used car world. A shoddy rust repair on a rocker panel meant pop-riveting a metal patch panel over the hole and filling the rest with body filler. An even cheaper repair for the same rusted rocker was to pop-rivet old license plates over the hole and mud them flat. The “dead cat” school of body work (a legitimate descriptive term back in the day) said don’t bother with the metal patch; simply fill the rust hole with newspaper or cardboard (or a dead cat) and mud that to contour. Buyer beware indeed. I had one customer who collected boxes of old license plates from salvage yards because he liked the metal gauge and flexibility when making these low-end rust repairs. He was so stingy that you could sometimes pick out his work on the car lot. He used so little body filler that you could see the license plate numbers ghost through the color, also very thinly applied.

Removing any trim before painting meant that the trim had to be reinstalled. No time for that in the 1970s used car world, so they taped everything, even simple pin-backed badges and logos. These used car shops were never concerned with production speeds or repair quality; cost was the only thing that mattered. As a result, lots of these guys grudgingly bought the cheapest automotive masking tape only after they tried the cheap hardware store tape that immediately bled through and shredded when you removed it. To their credit, I saw some of those shops do a remarkable job masking rather than removing anything from the car.

I had a one-man shop who picked up a damaged car every morning from the Cadillac dealer’s used car lot and returned it repaired the next morning. He got paid more than bottom dollar for his (still cheap) work. He’d stop by our store, have us mix a pint of lacquer for that day’s car and head home about 25 miles away. He was a wizard at masking, and the Cadillac used car manager paid him more than the going rate because even their picky customers couldn’t find the evidence of repaint in the door jambs or mirrors on his work.

I had used car shops whose techs competed for the title of “Bondo King” awarded by each other to the guy who slopped on the most gallons of body filler rather than do any metal work. I had customers spread filler with the trowels you use to spread floor adhesive.

One of the few required used car shop tools was an air board sander. Running back and forth in a straight line, these tools could be loaded with a curved-tooth metal file (shave off the partially hard filler) or 2 3/4” x 17 1/2” sanding shoes, with clips. This was long before any self-stick sandpaper. In the same vein that only initial cost mattered, my used car shops wanted only the cheapest imported air tools. They were built to the same shoddy tolerances that these guys used to repaint used cars, so having their tools break apart regularly seemed about right to them, I guess.

Where’s the good news in this sorry tale of low-end used car work? Well, for one thing, we’ve ended rust as the most prevalent and catastrophic vehicle failure. Thank you, epoxy primer. For another, consumers are more sophisticated and won’t accept visibly poor repairs. My customers got away with some shoddy repairs, but on the other hand, the vehicle manufacturers of the day weren’t setting the quality bar very high. Sometimes it was hard to tell if the disgruntled workers on the assembly line were any better than the worst used car shortcutters.

While my ordinary 1970 collision shops were scantily equipped, you could (and many did) start a used car body shop with: a five-gallon can of cheap thinner, D/A sander, air board and a cheap spray gun. Total outlay: $400 and some jobber credit for the tape and paint. It’s like your parents said, “You get what you pay for.”

Inside the Cheap, Rusty World of Used Car Body Shops in the 1970s