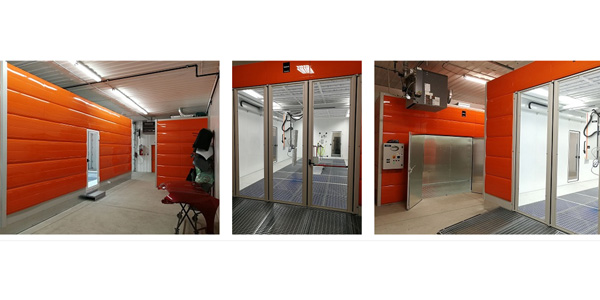 Symach announced the installation of its FixStation equipment at Rowley’s Accident & Hail Repair in Loveland, Colo.

Symach announced the installation of its FixStation equipment at Rowley’s Accident & Hail Repair in Loveland, Colo.

“We have been very impressed with Symach’s equipment,” said Bill Park, CEO of Axiom Accident & Hail Repair, parent company of Rowley’s. “It has allowed us to have a predictable production model so we don’t have to wonder if a vehicle is going to be ready to be delivered on time.”

The FixStation is equipped with a Flydry robot, paint-mixing room, a vacuum sanding system and a Multibox with plugs and retractable air and electric. Rowley’s also uses the Drytron, a portable gas catalytic dryer.

“This allows us to use the same drying process when applying body filler and primer outside of the FixStation,” Park said.

Park first learned of Symach equipment about a year and a half ago. He said the business was looking for a piece of equipment that would enable technicians to paint and repair vehicles in the same location. As a result, he decided to incorporate the FixStation into his new business model.

“Symach’s FixStation is truly a body shop in one box,” explained Osvaldo Bergaglio, CEO of Symach. “This hybrid solution works as a spraybooth and workstation, all in one spot.”

Utilizing the FixStation, Bergaglio said one multi-skilled technician can perform an average of four repairs per day without moving a vehicle, which results in one repair every two hours.

The equipment has helped the shop improve productivity and produce faster one- and two-panel repairs, according to Park.

“It has provided continuous workflow throughout the shop, which is enormous for us,” he said. “We can go from PDR to conventional to prime to paint without stopping.” Park noted that the shop expects 85 percent of all repairs, including roof replacements, will be completed within 72 hours.

As an example, the facility completed a $13,000 repair in three and a half days “The biggest thing is trusting the process,” said Park. “You have to be nimble in your thinking and open-minded.”

After the equipment was installed, Symach spent time training the staff. “Their team is highly professional,” said Park. “There was never a communication point or a document or a conveyance of any sort that wasn’t 100 percent top notch.”

Park expects to open two additional locations this year and incorporate Symach’s equipment. The long-term goal is to open 37 facilities across the country in high-frequency hail markets.

“By giving our technicians the most technologically advanced tools, such as the equipment from Symach, we are able to ensure the highest quality repairs from beginning to end,” said Park.