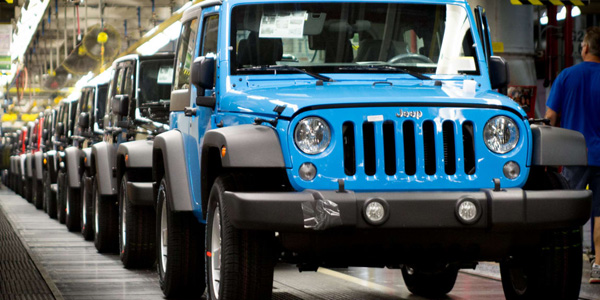 The Jeep Wrangler is No. 1 on the Cars.com American-Made Index for the first time in the 11-year history of the list.

With Independence Day right around the corner, Cars.com is celebrating the cars and trucks with the most American-made content.

Topping the list for the first time in the 11-year history of the American-Made Index is the Jeep Wrangler. No. 2 on the list is the Jeep Cherokee.

Cars.com noted that 74 percent of the parts for the Wrangler are made in the United States, compared to 70 percent of the parts for the Cherokee – both of which are among the highest domestic-parts percentages on the index. All engines and nearly all transmissions for the Wrangler and Cherokee hail from the United States, and both vehicles are assembled in Toledo, Ohio.

“In an era of build-American sentiment, a sizable portion of shoppers still care where their car comes from,” said Joe Wiesenfelder, Cars.com’s executive editor. “That said, it is important for shoppers to remember that the logo on the vehicle doesn’t necessarily tell the full story. The cars on this year’s list of the ‘most-American’ hail from automakers headquartered in Europe and Asia as well as North America. Conversely, some vehicles with distinctively American brand names rank low by AMI standards.” 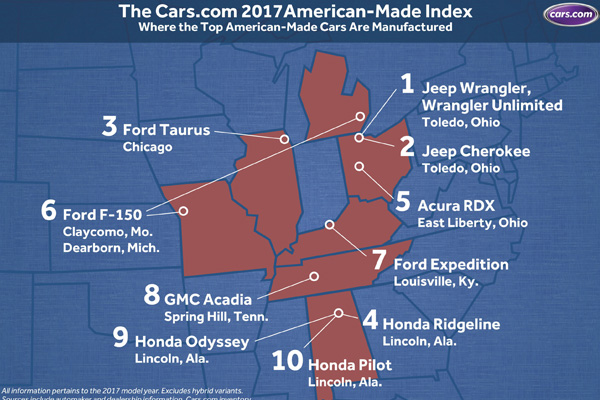 Here are the top 10 most American-made vehicles:

To adapt to changing times in the automotive industry, Cars.com noted that it revamped the 2017 American-Made Index based on five criteria:

“Over the American-Made Index’s 11-year history, the number of models meeting our original criteria has fallen due to the globalization of automobile manufacturing – from more than 60 vehicles in the index’s inaugural year to eight last year,” Wiesenfelder said. “By the original requirements, only three 2017 models would have qualified this year. With that, we’ve revamped the AMI to account for the changing landscape and to reinforce factors representing the domestic economic impact when a buyer purchases one model versus another. Cars.com analyzed more than 100 light-duty passenger vehicles built in the U.S. to arrive at the top 10.”

Jeep Wrangler Is ‘Most American-Made’ Vehicle