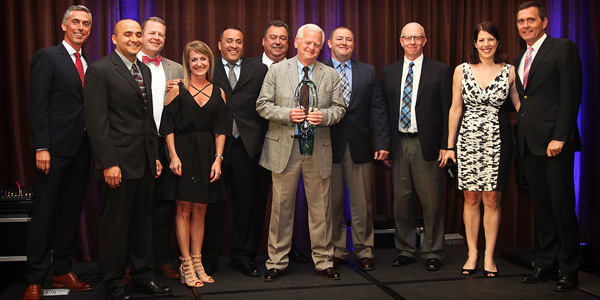 This is the second time that KAPE/Capital Paint has been named the ColorSource Distributor of the Year.

“KAPE/Capital has been a key partner of BASF’s for years, showing double-digit growth for more than five consecutive years,” said BASF North American Distribution Director Denise Kingstrom. “2016 was a pivotal year for our business, and KAPE/Capital exemplified true partnership and successfully expanded outside of Texas and Louisiana, while maintaining strong customer focus in all markets.”

This is the second time that KAPE/Capital Paint has been named the ColorSource Distributor of the Year.

“We added five new locations in 2016 and have aggressively grown in Central Texas and Colorado,” said Todd Kinsel, owner of KAPE/Capital Paint. “The addition of key employees with industry experience has attributed to our success and put us on a path of growth for the future.”

Kinsel attributes the success to “great people, great paint and a commitment to the customer.”

“Our customers demand an excellent paint and a distributor that can offer real value in maximizing their bottom line,” he added.

In addition to the Distributor of the Year award, KAPE/Capital received the ColorSource Diamond Award for three years of consecutive growth, along with eight other distributors:

BASF designed the ColorSource program exclusively for single-line distributors of BASF refinish paints and coatings. To learn more about becoming a ColorSource distributor, contact Paul Barnes at [email protected] or (508) 272-8474.

Advertisement
In this article:KAPE/Capital Paint, refinish