The collision center at Gullo Ford discovered that creating a “fast lane” for minor collision repairs was the key to improving its cycle time. 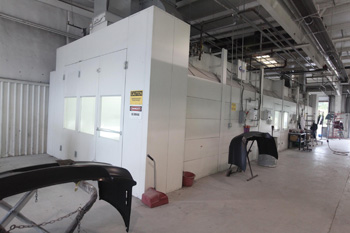 Several years ago, Billy Coleman, manager of the collision center at Gullo Ford in Conroe, Texas, was staring at a cycle time he thought was pretty ugly: more than 10 days. Set on improving that number, he reached out to his 20-group for ideas, and one was the creation of a “fast lane,” or a dedicated area of the shop that handled only minor hits. But before rushing into it, he studied it by observing some shops in his 20-group that already had speed lanes.

“Some of them ran it with a dedicated booth and dedicated technicians, and others I found out didn’t really have a speed lane even though they said they did,” says Coleman. “The model I followed, however, was the one where the shops actually bought into the concept, bought specific equipment for it and committed staff to it.”

That’s one lesson Coleman learned early on about establishing a fast lane: be committed. He initially tried it before buying additional equipment, and it didn’t work very well.

“Without the equipment and dedicated people, it’s very hard to do,” he admits. “My paint booths that are for the fast track only do fast track work, period. If I didn’t have work in that area, those booths would sit idle and I would have people with nothing to do. But I haven’t seen that yet.”

That’s because Coleman’s shop, with $4.2 million in sales and eight DRPs, keeps fairly busy, cranking out 125 cars per month, 35 to 55 through the fast lane. If the fast track technicians get too busy, he will funnel some of their work to other bodymen who aren’t busy. Also, his heavy side painter sometimes has to work on lighter hits in order to get them done on time. But that’s all part of the ebb and flow of the business.

“I have a production manager who works closely with the pulse of the shop and will move jobs when he needs to because the ultimate goal is to take care of the customer and get the car out,” Coleman says. “You can’t be rigid. That’s the mistake I’ve seen some people make with fast track. They say it has to be this or has to be that, but our deal is, it has to be done in less than three days, end of story.” 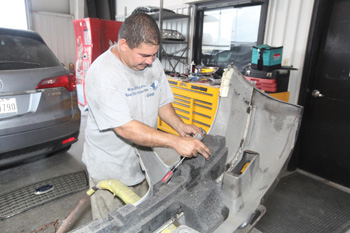 Staffing It Up
So how many employees and what type of equipment does Coleman solely dedicate to the fast lane? The three employees consist of one body tech, one refinish tech and a helper who “floats” where needed. A 54-foot spraybooth specially built to accommodate up to four vehicles at a time and refinish products that allow a 15-minute dry time for primer and buffing of clearcoat in 45 minutes are ideal for fast repairs. Coleman worked with a spraybooth manufacturer to custom design a booth that was conducive to quick repairs, conveying that he couldn’t change the size of his paint shop and how many cars he felt they needed to be able to put through on a daily basis.

“They said they had a booth made and designed to fit the area that wasn’t a drive-through, but they could convert it to a drive-through,” says Coleman. “They also had the mechanical built on top of the booth to take up less space. Ultimately, we put two 24-foot booths back to back and put a drive-through door in the middle so I can close it up and have two separate booths or open it up and have 54 feet of spraying ability with enough room in between each car to not worry about overspray.”

As far as finding the technicians ideally suited to fast lane work, Coleman says it takes someone special who can handle the high volume of jobs.

“It should be someone who can multitask and not get flustered when they have 10 cars torn down at one time,” he says. “They also have to be organized. Everything has to go on the shelf, and you can’t be losing fasteners, bolts and retainers. And everything has to be separated where they can put it right back together when it comes out of paint. You can’t be looking for hamburger buns and what kind of meat you’re cooking if you’re going to serve a bunch of people at one time.”

Coleman says his fast track guys are some of the highest paid in the shop, in part because they’re logging 55 to 65 hours a week turning 100 to 130 flat-rate hours.

Although the shop’s total RO is well above the industry average at $2,800, the RO for jobs going through the fast lane is $1,500. The majority of the fast track vehicles come via Coleman’s DRPs. As a result of installing the fast lane, Gullo’s cycle time has dropped to 7.4 days overall (a far cry from the 10-plus days they used to achieve) and 3.1 days in fast track.

Bumper jobs used to be a nightmare when they were the responsibility of heavy-line techs who had their own big jobs to do. Then, when the bumper went over to the paint shop, the tendency was for the painters to ignore it because they were trying to get out their 25- to 32-hour jobs.

“They didn’t want to stop to work on them,” says Coleman.

Do Your Research
Coleman’s advice to shops considering doing fast track repairs is simple: have a plan and do your research.

“You must design your fast track around what you have to work with and then, once you have that, you have to plan on what type of equipment to dedicate to it. You may already have all the equipment you need, but you need to say, ‘This booth is now my fast track booth and we’re not going to do complete paint jobs in it anymore or let that tri-stage pearl that gives us color match problems all the time tie it up.’”

A fast lane, Coleman says, is a fast way to cure your cycle time ailments.

“If you’re getting beat up all the time because your cycle time is high, you need to consider fast track.”

Life in the Fast Lane