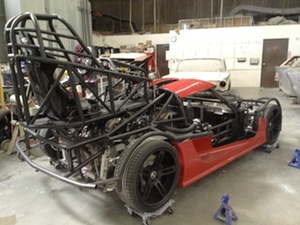 Lincoln Electric has announced that its equipment played a key role in the new movie “Need for Speed.” Los Angeles fabricator Paul Clarke, contracted by Ghostlight, used a host of Lincoln Electric products to help construct more than 22 vehicles used during filming.

Cars seen on-screen are not the typical models that a consumer would drive off the lot. First, many of the hand-fabricated vehicles are patterned after recognizable high-performance vehicles and supercars. Second, multiple versions of each car are created with numerous adaptations, many unseen, to produce the fast-paced, thrilling scenes that play a substantial role in this movie. These adaptions include a number of camera mounts, fabricated and protected positions for a cameraman, enhanced access for interior shots or even chassis, roll cage or drivetrain modifications designed to allow the car to survive or protect the driver during chases or crashes.

“They wouldn’t be able to get the shot they want or the crash they need without the modifications,” said Clarke. “We’ve had to cut floors out of cars, make a roof removable, and pop doors on and off. Sometimes, we even have to cut cars in half. You have to get creative through thoughtful, careful welding and fabricating.”

To achieve the custom vehicles for “Need for Speed,” Clarke and the Ghostlight team used numerous Lincoln Electric products during the fabrication process, including multiple POWER MIG welders, a Tomahawk 375 Air plasma cutting system and a Precision TIG 375 welder. They also utilized a variety of Red Line welding apparel and VIKING auto-darkening helmets.

“We’re always happy with the results from these machines and their performance,” said Clarke. “When you’re welding things like roll-cage material, you need to get into some tight areas and weld around existing structures. Lincoln Electric has equipment that is useful for that. There are times when my Lincoln Electric Precision TIG 375 welder is running around the clock.”

Based on the Electronic Arts (EA) video games by the same name, “Need for Speed” follows an underground racecar driver, played by Aaron Paul from the popular TV show “Breaking Bad,” as he takes part in a cross-country race and plots revenge. Recently released after serving prison time for a murder he didn’t commit, Paul’s character is on a mission to avenge his name and win the race, but he’ll have to watch his back with his ex-partner and bounty hunters on his tail.

While not based on a specific edition of the video game, the action-packed movie will focus on high-speed cars and stay true to the spirit of the video game series. Along with Paul, the film will star Michael Keaton, Dominic Cooper from the “Captain America” movies, Christina Hendricks, known for her role in the hit TV show Mad Men, and British actress Imogen Poots.