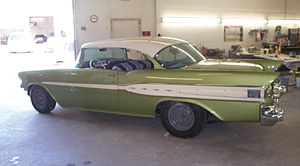 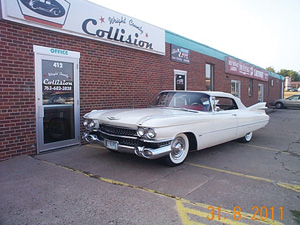 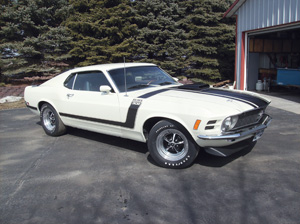 Neil Bateman has a black book full of ladies’ numbers…and his wife doesn’t mind one bit. Some of them stop by to watch him work in his shop. If he hasn’t seen them in awhile, he’ll call them and ask, “How’s my baby?” Fortunately, he hasn’t had to totally let go of any of them just yet.

The reason his wife hasn’t clanged a frying pan over his head yet is because these “ladies” are not home-wrecking hussies but cars that Bateman has restored over the years. And now that he owns his own shop, Wright County Collision in Buffalo, Minn., he can spend more time bringing these old ladies back to life.

Bateman got into collision repair by accident…literally. When he smashed up mom and dad’s car, they made him fix it himself. But a punishment it was not. Growing up watching his older brothers tinkering with old cars, he fell in love with it, too, so he couldn’t have been happier returning his parents’ car to roadworthy condition.

Bateman spent the majority of his career holding various positions at various body shops, with one 22-year stint as a manager at a dealer shop. When he was “turned out to pasture” three years ago, he thought it was the perfect time to finally open his own shop, subscribing to the mantra, “It’s never too late.”

One might question Bateman’s sanity for opening a shop in the twilight of his career in a down economy, but the way he figures it, when you’re down so low, the only place to go is up.

Indeed, Buffalo only has 10,000 residents, a far cry from the metropolitan areas where Bateman used to manage other people’s collision repair facilities. And now Bateman can do what he wants – collision work to pay the bills and two to three restoration/ customization projects at a time to satiate his true passion.

“I looked at diversifying,” Bateman says. “I always had a love for collector cars, customs and street rods, and this was an opportunity for me to try to make this work. And so far, it has been very good for us.”

Bateman is not on any insurer DRPs, not because he is anti-DRP but only because he doesn’t believe in putting all his eggs in basket and believes in putting the vehicle owner first.

“I’m here to fix my customers’ cars for them and not necessarily for the insurer,” he says. “I find that with a lot of DRP shops, there is a certain amount of loss between you and the customer when you’re trying to fix their car.”


Unlike other shops that say they do restoration and customization, Bateman has a full-time technician, Brad, solely dedicated to these projects so they move along and don’t stagnate. It takes a special kind of technician to enjoy and perform this work well, and Bateman counts himself lucky to have such an employee.

“Restoration work is about getting it done right and making everything look right,” he says. “Brad is not the kind of person you’re going to rush to get things done. Plus, he’s more versatile when it comes to mechanics than your typical collision tech. I’ve had a few guys who tried it but you had to back them up many times and say, ‘No, this isn’t how you do this.’ You have to be very detail-oriented.”

Money is often an issue body shops run into when doing restoration projects, specifically running out of it when the customer ends up turning his pockets inside-out. Bateman says a good way to avoid that is to get the money up front or pre-qualify potential customers. But he also does something a little different than other shops.

“Most shops get some money to start, then get back in contact with the customer as the project nears completion,” he says. “But I encourage people to be involved in what’s going on as we’re doing the project.”

Bateman says it’s also important to educate customers because they sometimes they have unrealistic expectations.

“You need to make sure they know up front what to anticipate when they’re going into these projects so they don’t end up with any surprises and the car gets stalled because of finances or other reasons,” he says. “They need to be fully aware that these things take time. A lot of people come in anticipating something going on in two to three months when it actually takes a couple years. And there’s nothing worse than having a frustrated customer.”

As far as time, Bateman says a shop has to physically and consistently schedule in restoration projects – and not get into too many complete restorations at one time.

Bateman says the investment for a shop looking to get into restoration/customization work isn’t much give that it probably already has most of the equipment it needs. A shop might consider acquiring metal-forming equipment, but Bateman says it depends on how in-depth a shop wants to go.

“The advantage we have here is that we’re in close proximity to a fabrication shop,” he says. “We also have an engine rebuilder next door.”

Bateman’s shop currently has sales of $450,000, 35 percent of which are from restoration/customization. He says that percent is growing, too, mostly from word-of-mouth. He also runs an ad in the monthly publication of the Minnesota Street Rod Association (MSRA), one of the largest car organizations in the country that he also happens to belong to. Add to that the number of shows Bateman goes to and spreads the word about his business, and he pretty much has the advertising side of his passion covered.

Bateman has won numerous awards for his restoration work, including being nominated for Custom of the Year by MSRA for a 1954 Business Coupe. But the project he’s most proud of is a 1970 302 Mustang that he totally restored from the ground up.

The story goes that the person who brought him the car purchased it in 1971 from somebody who was on his way to Vietnam. He drove it until 1974 and then parked it. Years later, after some prodding from his wife, he decided to finally try to get it fixed up and back on the road. However, the restorer ceased the repairs for some unknown reason. He heard about Bateman through his father, who Bateman was doing other work for, and decided to try once again to bring the car back to life.

Bateman and his staff basically took it down to a shell, pulling the drivetrain, all the glass, doors and fenders, and the interior. The owner handled all of the mechanical work himself. Fortunately, the car didn’t have a lot of rust. In the end, the total bill came to $35,000. Even though Bateman says the owner didn’t show the car a lot for personal reasons, it did win some awards at the shows where it was displayed.

“The history behind it and how it was all put together made it the most rewarding for me,” says Bateman. “The mission of the owner was to build it utilizing as many local people as possible, which showed his dedication to the community. It was purchased locally when it was new, too, so this all kind of brought everything full circle.”

Current projects Bateman is working on include a 1934 Chrysler Airflow, a 1970 Ford T5 and a Model A Ford belonging to his son, Adam, who works for Wizards Products. The work on the Airflow mostly relates to maintenance, including the windows and the windshield wipers.

“The owner has had it for 15 years, but his wife would prefer to ride in it if the wipers worked in the rain,” says Bateman.

Bateman says the most famous car he ever worked on was a 1959 Cadillac convertible owned by none other than Elvis Presley…
supposedly. The story goes that it was given to Elvis’s housekeeper, and a friend of Bateman’s bought it along with a couple of Elvis’s platinum records that the housekeeper had also received. A concourse car, it was shown at the National Cadillac Show after Bateman worked on it and received 94 points out of 100 in the touring class.