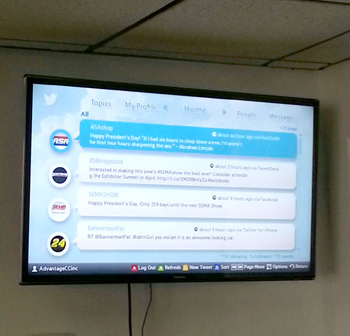 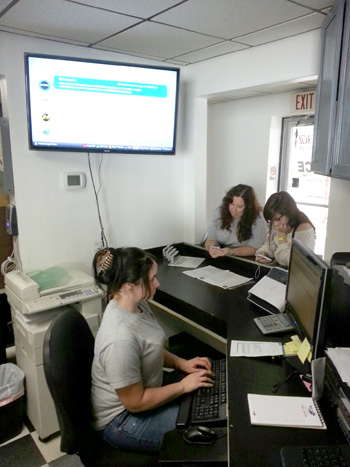 A Louisiana body shop owner is finding a recent investment in a “smart TV” for his shop is really paying off – especially when it comes to addressing the “we don’t pay for that” line from insurers.

Abel Cantrelle, owner of Advantage Collision Center in Houma, La., recently picked up the 40-inch Samsung at Best Buy and installed it in his front office where customers and insurers alike can see it. It provides a constant feed of his Twitter account, and when insurers come in now and say, “We don’t pay for that,” he poses a question to his fellow shop owners on Twitter.

“I’ll ask, ‘Does anybody get paid for masking jambs?’ and a guy from Mississippi will say, ‘Yep, we do,’” says Cantrelle. “And then the insurer will say, ‘There’s no such thing,’ and then I say, ‘Well let’s ask Mitchell then.’ And then they freak out.”

Cantrelle says he has already had a few collision repairers from Baton Rouge to Lafayette who saw his TV and are now connected with him. He recently joined the newly formed Lousiana Collision Repair Association after becoming fed up with State Farm and other insurers’ tactics.

“Six to eight months ago, I had the final straw and told [State Farm] to leave,” he says. “Now when they walk in the door, they’re walking on glass floors, and I tell them don’t break the glass or your ass could be grass and I will put you outside the door in a heartbeat. State Farm wanted this, and now they’re going to have it.

“Last week, they did a car for me and they paid me for the seam sealer and every process I had to do. I tell any insurer if there is a process I’m not doing on a vehicle, I will pay you back. I will prove everything I’m doing. We’re taking pictures of every single thing now.

“One big insurer told me some of these shops in the backyard will charge for this and this, and I say do your job and go catch them and find them not doing those things and make them pay you back. I recently wrote a car for $5,040 and State Farm wrote an estimate for $2,800, threw it on my desk and ran. I made them come back out, rewrite it and go over it with me and they ended up writing the same estimate as me.”

By telling the collision world about his new communication tool, Cantrelle hopes other shops will see the light and join Twitter and realize it’s a great way to know what other shops in other parts of the country are dealing with.

“If everyone [joined Twitter], the screen would be popping and jumping,” Cantrelle says. “I tweeted, ‘Enough is enough – I’m tired of working for free,’ and everybody loved it. But when you’re in Mississippi and I can tweet, ‘I have a Progressive guy here and he’s telling me shops aren’t charging for this or that,’ and then ask, ‘Are you charging for this?’ and they say, ‘Yes,’ I can look at the Progressive guy and say, ‘Well, there’s your answer.’

“United we stand, divided we fall. If people don’t start joining hands, it’s going to get bad. The last I checked, slavery ended with Lincoln.”