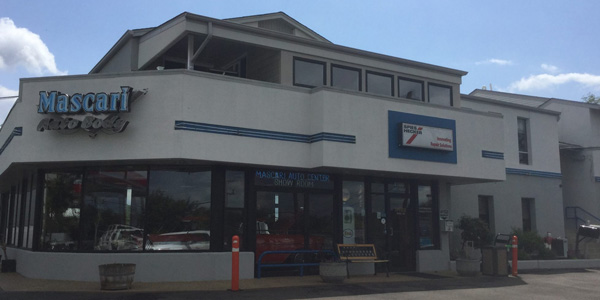 Mascari’s bread and butter is a 45,000-square-foot body shop that can accommodate 88 cars. But the shop also enjoys a steady stream of income from a full-service gas station and convenience store that sells – among other things – bread and butter.

How does a single-site, independent body shop survive in an industry increasingly dominated by consolidators, MSOs and franchises?

In the case of Mascari Auto Center in Allison Park, Pa., it comes down to one word: Diversify.

“There isn’t anything we don’t do,” says Dennis Mascari, who has owned the Pittsburgh-area business since 1964.

While Mascari’s bread and butter is a 45,000-square-foot body shop that can accommodate 88 cars, he also enjoys a steady stream of income from a full-service gas station and convenience store that sells – among other things – bread and butter.

But Mascari saw the writing on the wall years ago, when consolidators began scooping up shops and putting their corporate DRPs “right there in your neighborhood.”

“When they move into an area, they crowd out the little guy,” Mascari asserts. “The only way you can compete with them is to be able to run with them.”

Mascari’s approach to running with the big boys has been to go above and beyond what you’d expect a collision repair business to do. A prime example is the shop’s fleet of 48 rental cars, available only to repair customers. (And by the way: The shop does mechanical repair work too.)

“We don’t make the customer pay anything out of pocket,” Mascari says. “We accept what the insurance companies pay.”

For customers who come in for mechanical work, Mascari provides a free rental car for the day if they need one. If the job takes longer than a day, they have to pay for the second rental day. However, the shop makes exceptions based on the cost of the job. “If they spend over $1,000, the second day is free,” Mascari says.

Likewise, the shop typically makes an exception for collision repair customers who need a rental car for a few extra days beyond their coverage limit.

“We buy the customer happiness by giving them the car at no charge,” he says. “If they’re a claimant, that’s a different issue. But if they’re insured, we bend.”

In addition to collision repair, mechanical work and vehicle restoration, Mascari Auto Center operates Allegheny Body Supply, an onsite retail parts store that also functions as the shop’s parts department. Mascari opened the store in the early 1990s as a way to buy paint and materials at wholesale prices.

“We probably have one of the best assortments of nuts, bolts, screws and clips in Western P-A on a retail basis that you can walk in and get in lieu of buying from a catalog,” Mascari explains. 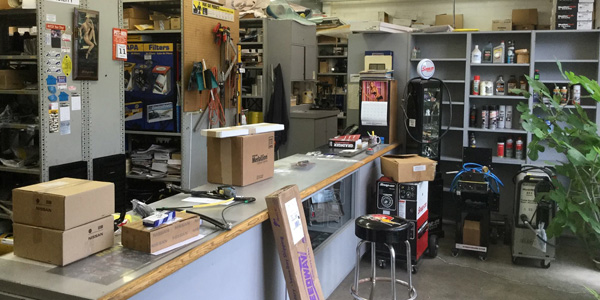 PART OF THE STRATEGY: Allegheny Body Supply is a retail parts store that also function as the shop’s parts department.

Touchup paint is a popular item.

“We convert basecoat/clearcoat into single-stage and then sell it to the customer,” he explains. “When people buy a tube of paint from the dealer, it’s a basecoat color and it’s not a single-stage so it goes on dull. A lot of people know the difference and they want a color that will match.”

While many shops are dedicated to one paint manufacturer, Mascari carries three lines of paint.

“By having three separate paint lines, we’ll match the damn thing, one way or another,” Mascari says.

The remodeled Exxon station/convenient mart next to the body shop includes a sandwich shop with a dine-in area and a drive-through window. The sandwich shop is especially popular with truckers and contractors, as the parking lot on the five-acre campus provides plenty of room for large vehicles to get in and out. (Mascari estimates the parking lot can accommodate 200 cars.)

The Exxon station still has a full-serve island, and “believe it or not there are a lot of people who will pay that extra 15 cents a gallon” to take advantage of it, Mascari notes.

Mascari says he does a brisk business in propane, and the facility has a large cable to refill the propane tanks on campers and motorhomes. While they’re there, many of those customers also buy bundled wood, cut from Mascari’s 250-acre farm. The store sells around 2,000 bundles a year, Mascari estimates.

In the winter, customers can buy de-icing salt – by the bag or the palette.

“We have two trucks that plow snow for the local businesses and residential areas,” Mascari adds. “So there isn’t much we don’t do.”

All in the Family

Perhaps one of the few ways that Mascari Auto Center is similar to other independent body shops is the fact that multiple generations of the same family are running the business.

One of Mascari’s two daughters, Gina Novick, is the administrative manager, and her husband is the head painter in the body shop. Mascari’s other daughter, Lea Sprang, runs the Exxon station and sandwich shop. Sprang’s husband is a mechanic and tow-truck driver at the auto center. 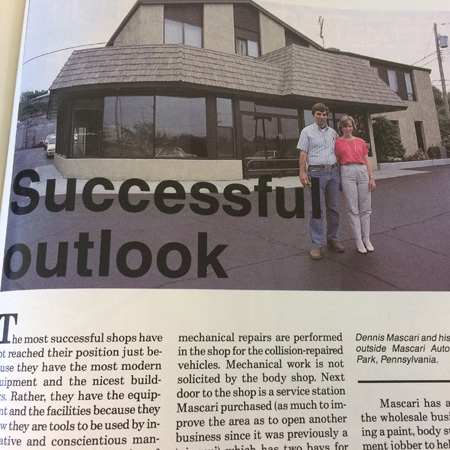 THEN AND NOW: BodyShop Business profiled Mascari Auto Center in the July 1986 issue. The photo shows Dennis Mascari and his daughter, Gina.

Interestingly, Mascari’s dad was a barber by trade. But he also was a car enthusiast, and Mascari remembers being by his father’s side and handing him tools while he rebuilt engines. On top of that, Mascari grew up about two blocks from a body shop, and worked there during the summers and at night.

When he finished college, Mascari got an office job “and hated it.” That lasted about six months.

“I wanted to do body work,” Mascari recalls.

Mascari, now 75, still does body work, but over the years he’s embraced diversification as a survival strategy.

Says Mascari: “If you’re a guy who strictly does body work and you’re a mom and pop store with room for eight or 10 cars and don’t have an array of DRPs, you’re almost a memory or are a memory.”

Repair volume/number of cars per month: 90

Mascari Auto Center: Much More than a Collision Repair Business