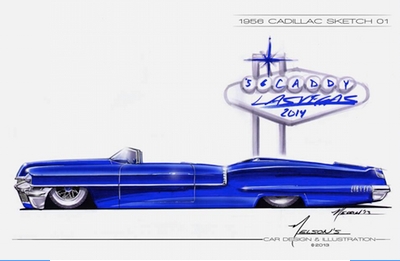 Matrix Automotive Finishes has announced that it will feature a one-of-a-kind, custom built 1956 Cadillac Roadster Deville nicknamed “Blue Streak” in its booth (10669) at SEMA.

Bare Bones Custom Paint & Speed Shop, located in Houston, Texas, will unveil the vehicle, which has undergone many modifications. It was stretched by four feet, its roof was removed and its body was made into a Roadster. It features an air ride suspension and a Matrix Electron Blue Metallic finish.

Last year at SEMA, Bare Bones, along with designer Mike Satterfield of MP Speed Shop, unveiled the Gulf Racing Livery 1967 Ford Fairlane at the Meguiar’s Car Crazy showcase. The car was named one of the top five classic Fords at SEMA by Modified Mustang and Fast Fords Magazine, and it was featured in Hot Rod Magazine’s live coverage of SEMA.

“We wanted to do something out of the norm for this build and went full custom on it to be different and bring the sleek, sexy design of a Cadillac back into the mainstream of custom car building,” said Tim Haase, owner of Bare Bones Custom Paint & Speed Shop. “In the past, we have used other products and found that Matrix primers, basecoat and clearcoats are a higher quality above the rest. Matrix provides a high, durable finish with deep rich colors that our clients require for their collector cars.”

Advertisement
In this article:matrix, SEMA

AASP/NJ and Vendors Count Down to NORTHEAST 2020

Registration for CIECA CONNEX 2020 Now Open
Connect with us