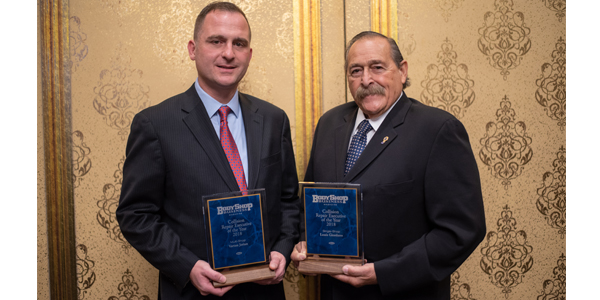 For the 34th consecutive year, BodyShop Business has recognized distinguished collision repair facility owners with its Executive of the Year award.

For the 34th consecutive year, BodyShop Business has recognized distinguished collision repair facility owners with its Executive of the Year award.

The awards are given to true collision repair “visionaries,” individuals who have experienced great success by being forward thinking, overcoming challenges and persevering. Winners are selected based on experience, special achievements and involvement within the local community and collision repair industry.

This year’s Single-Shop award winner is Louis Giordano of Giordano’s Collision, and the Multi-Shop winner is Vartan Jerian of Caliber Collision (formerly H&V Collision Centers). Giordano and Jerian received their awards at the Collision Industry Red Carpet Awards Breakfast on Oct. 31 at the SEMA Show.

Louis Giordano’s collision repair career has spanned an incredible 58 years. His father opened up Selden Body Works in 1948, and he worked with him starting at 14 years old, learning all aspects of the auto body trade.

He has worked in many roles, both on the collision and insurance side, including body shop owner and insurance adjuster. He has owned three body shops in his lifetime, and has owned his current shop since 1995. One of the great pleasures he gets out of the job is helping people. 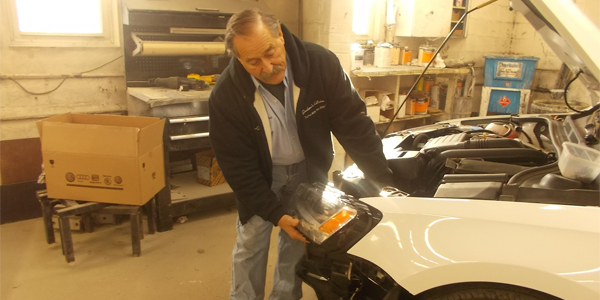 Even at 73 years old, Giordano is still involved at his shop.

“For most people, it’s their first time getting in an accident, and they don’t know how to travel through that and the issue between insurers and shops, so I like to help people through that,” says Giordano. “Sometimes it’s traumatizing and customers cry, so you have to hand-carry people through a collision accident. It makes me feel good when I’m able to help people who are really in need of support.”

He has been a member of the Long Island Auto Body Repairman’s Association since 1970. He has I-CAR recognition, an NYS licensed adjuster’s license, and GM technical training certificates.

When Giordano was recognized with the Single-Shop Executive of the Year award at the Collision Industry Red Carpet Awards Breakfast, he felt like he was accepting the award for all small shops.

“I kind of felt like I was also representing a lot of small shops as accepting the award for all the hard work and everything they do,” he says. “Most shop owners try to help people like I do and are community-minded. It wasn’t all about me getting recognized but me and all the people like me.”

A Change of Focus

Vartan Jerian started working for his father’s collision repair shop 25 years ago and has since grown it into seven locations and 200 employees. By 1996, he grew the initial shop’s revenue from between $200,000 and $300,000 to $1 million by changing his father’s focus on wholesaling.

“We had customers walking in the door, and my father would turn them away because he was focused on this other work,” Jerian said. “I said, ‘Wait a second, these people are here and they want to give us their money. Let’s concentrate on that and build our business on taking care of the customers.’” 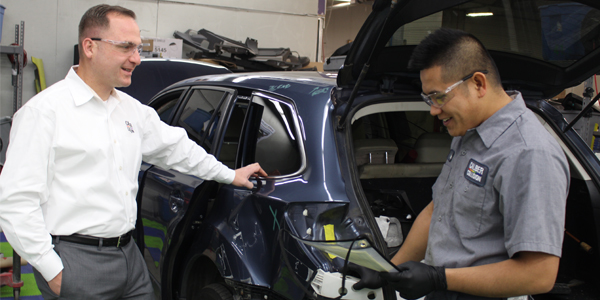 Jerian believes his team deserves the award he received just as much as he does.

Eight years ago, he was recognized by the Albany business community for the prestigious 40 Under 40 awards. He was one of the first shop operators in the Capital Region to implement lean production processes, drastically improving all his shops’ KPIs. In 2010, his company became the first in New York State to be recognized by the Coordinating Committee for Automotive Repair for promoting environmental efficiency and safety. They have also been recognized for their 35th and 40th anniversaries by members of the New York State Senate, State Assembly, Rensselaer County Executive and Rensselaer County Legislature.

Jerian’s company’s charitable activities are numerous. They were recognized by Toys for Tots in 2017 for support of toy collection drives, an initiative he started. They were also recognized for their support of the Tri-City ValleyCats minor league baseball team. For the last eight years, they have teamed up with GEICO to donate 21 cars to 21 military veterans and families in need around the Capital Region. In 2017, they partnered with State Farm to donate a van to the Veteran Coalition House in Albany. In 2011, they teamed up with GEICO and Catholic Charities of the Diocese of Albany to retrofit a van for wheelchair transport for a boy with a blood-borne infection who wound up losing his limbs.

For Jerian, being recognized with the Executive of the Year award tells him he’s doing something right.

“Winning this award gives me a great feeling of accomplishment,” he says. “You wake up every day hoping and praying you’re doing the right thing, and when you receive something like this, you can’t believe it, and it reconfirms that you’re doing the right thing every day and helping people out. And, it’s another reminder how great our team is and the accomplishments we’ve all made together, because obviously I couldn’t have done everything I’ve done in my career on my own. For me, it’s my team winning the award, and it feels good to revel in that. I’d be nowhere without the people who have backed me over the years.”