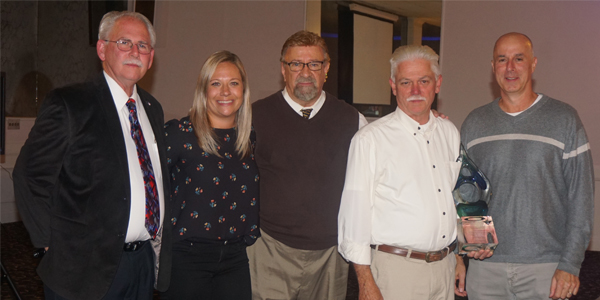 The AASP/NJ conducted a special awards ceremony, held its Board of Directors election and more at its annual meeting.

During its Oct. 17 annual meeting at Gran Centurions in Clark, N.J., the Alliance of Automotive Service Providers of New Jersey (AASP/NJ) conducted a special awards ceremony recognizing many longtime members, held its Board of Directors election and heard a presentation by keynote speaker Danny Gredinberg, administrator of the Database Enhancement Gateway (DEG).

The special awards ceremony included the first-ever Lee Vetland Lifetime Achievement Award, named in honor of the New Jersey auto legend and past association president who passed away earlier this year. Elder looked back fondly on Vetland as “a great friend, a great supporter and a mentor.” The award was created to honor a member who has been in the industry for at least 30 years and has reached the age of 60. Members of the Vetland family, including his daughter, Katie, joined Elder in presenting the award to AASP/NJ Past President Jeff McDowell (Leslie’s Auto Body, Fords).

Added McDowell, “We went way back to the Central Jersey Auto Body Association. When I was a young man starting my shop, we were both in Woodbridge. He told me to buy real estate. I listened to him, but maybe I didn’t listen as good as I should have. So, thank you Lee, wherever you are. I still have that house that you made me keep.”

“This really couldn’t come at a better time, as Saturday I celebrate my 37th year,” said Berman. “It really seems like yesterday; it went so quick.”

Keith Krehel, AASP/NJ mechanical chairman, was inducted into the association’s Hall of Fame.

“Keith has been very supportive of [AASP/NJ], even when many of the mechanical shops turned away from the association,” said McDowell. “He works as hard as anyone else, even though he doesn’t have a body shop and hears us speaking mumbo jumbo.”

Following the ceremony, Gredinberg took the floor to give an overview of the DEG. He went over the basic steps and benefits of submitting successful database inquiries to the information providers and how to use the site’s estimating toolbox to access information on non-included and included operations to assist in building an accurate repair plan.

“The more information you give to the DEG, the better we can help you,” said Gredinberg. “It’s not just helping you; it’s helping others industrywide.”

Gredinberg reminded the technicians that their voice is critical. The more concerns they bring forward, the better chance these concerns have at being escalated up the chain and eventually getting into the hands of those who can make change happen.

“Don’t think that just because you didn’t get a change, it didn’t work,” he said. “Your voice is not unheard.”