Shop Profile: Mentoring for the Future 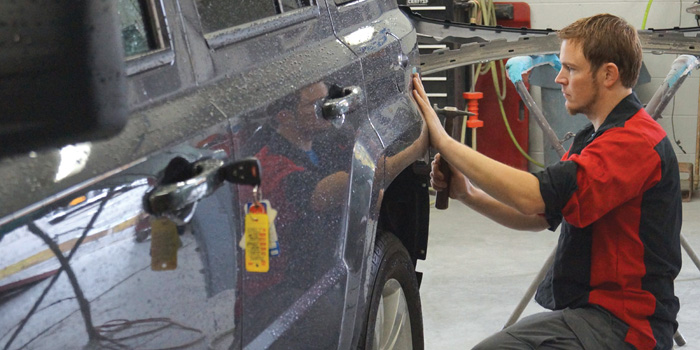 Cole’s Collision Center in Albany, N.Y., has been mentoring local students in the auto body repair field since it opened in 2007. In the years since, the shop has had over 20 students complete the program, which works with local community colleges and trade school students to mold new talent for the industry.

“We started bringing in students right out of the gate, partly due to our need for properly trained employees and partly due to our own experiences starting out in the industry,” said Josh Jewett, general manager of Cole’s Collision.

Jewett began in the industry as an apprentice, working under a mentor who still works for Cole’s Collision to this day.

“Having this sort of hands-on, one-on-one training with an established auto technician in a real shop can be the key to setting someone on the right path to becoming a certified auto repair professional,” said Jewett.

When an apprentice begins working with Cole’s Collision, they start in a “learning phase” and do very little hands-on work. But gradually, they begin doing more and more, which is when Jewett really sees them start to add to the shop’s production output.

Cole’s works with Judson Valley Community College and both the Capital Region and Saratoga Board of Cooperative Education Services to allow students to come in two to three hours a day for a total of 90 days.

“The younger students who enter our mentorship program come in with a good, generalized knowledge of different parts of the business,” said Jewett. “When they come in to work for us, they’re very easy to mold into our system of completing repairs and the way we run our shop.”

Jewett then works to develop the students in a certain category where they seem to fit best. They’re then put in an area that interests them instead of being thrown into something they’re not excited about. Based on an initial interview, Jewett and Cole’s get a good idea of where each apprentice will fit in.

“The program we have developed does include some limited classroom training. We have a written test that the student has to complete upon working with us for 90 days. It’s not pass-fail, but it does encompass everything the apprentice should have learned over the three months.”

The only cost to the shop is having apprentices educated to the point where they’re comfortable working on their own. And the program has paid off.

Cole’s Collision had a student who started in the program in 2013. He started young and didn’t come with a wealth of knowledge. But over time, he grew to be one of Cole’s top technicians. Today, he’s in the beginning stages of being part of the shop’s Jaguar and Land Rover group of master technicians.

Another student, who was highly motivated, entered the program in 2014 and began learning how to write estimates. Down the road, Jewett sees him becoming a manager.

The shop retains more than 75 percent of apprentices who train with them as full-time employees.

“Not everyone makes it through the 90 days. If it’s not working out with an apprentice in a certain area, there may be a different need,” said Jewett. “We’ll move them to another area if we see where they currently are will most likely not lead to a full-time position with us.”

It’s not hard to find help, but hard to find qualified help. Jewett believes that the quality of the workforce is something many shops struggle with, which is why Cole’s Collision began its mentorship program in the first place.

“You might try three people before you find one that’s ultimately someone you’re going to have working for you for a long period of time,” he explained. “That’s what we like about this mentoring program. We can mold these students to the way we do things and instill good habits in them early on.”