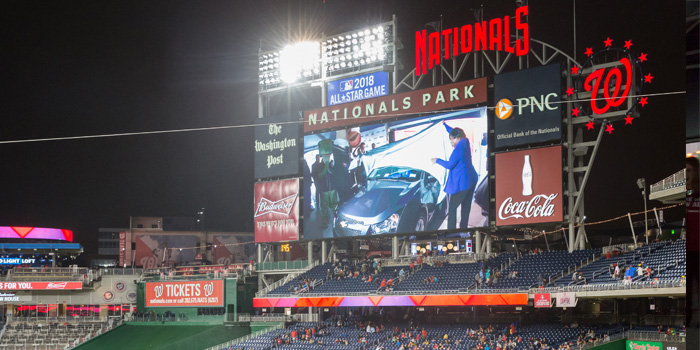 The four vehicles were donated as part of the National Auto Body Council’s Recycled Rides program, where businesses in the collision industry team up to restore vehicles to help individuals in need.

Two military veterans with service-related disabilities and two Gold Star Mothers who lost their sons in combat each received keys to practically brand-new cars from GEICO and Caliber Collision to thank and honor them for their service and sacrifices. The special presentation took place at the Washington Nationals ballpark during one of the National League East Division Champion’s last regular season home games.

“I’m so excited I don’t know what to do with myself,” said Sharon Neil, a veteran Army Reservist, upon receiving her newly refurbished 2014 Chevy Cruze. “I’m full, if you understand what that means, I’m full. Speechless, excited.”

The late-model cars were provided by GEICO and refurbished by technicians at Caliber Collision shops who volunteered their efforts as a community service. The four vehicles were donated as part of the National Auto Body Council’s (NABC) Recycled Rides program, where businesses in the collision industry team up to restore vehicles to help individuals in need.

“Our veterans and families have sacrificed a great deal and suffered tragic losses for our country,” said Paul Krauss, Caliber Collision senior vice president of operations. “Now, in their time of need, it is our honor to provide the gift of transportation that can help rebuild and restore their lives.”

“GEICO associates have a proud 80-year history of supporting our military heroes and local community members,” said Nancy Pierce, GEICO senior vice president. “We’re especially pleased with this opportunity to join the Washington Nationals, Caliber Collision and other local businesses to provide a helping hand to our deserving veterans and Gold Star Mothers.”