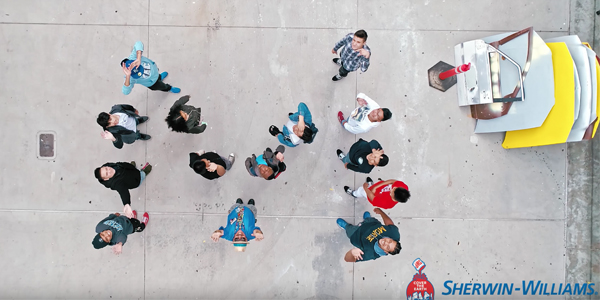 This top-secret shadow program, as NBC San Diego reported, gave them an opportunity to experience hands-on tutelage from industry veterans. The students collaborated with SEMA project leaders at Air Design USA, Sherwin-Williams and Ford Motor Co. to design an award-winning black and silver 2018 Ford Mustang and F-150 duo. After the students completed their contribution to the SEMA builds, the vehicles were transported and revealed at the 2017 SEMA Show in Las Vegas, after which they appeared on display at the 2018 Detroit and LA Auto shows.

“This was one of the most special SEMA builds. Not only was it the first time I was awarded two vehicle projects by Ford, but it also is a project that so many people get to share in the success,” said Billy Longfellow, vice president of design and engineering at Air Design USA. “These kids, they poured their hearts into the builds. And today, they share in the outstanding design award we received.”

A short video created by Air Design USA, Sherwin-Williams and Ford Motor Co. to commemorate the experience and show appreciation for the hard work and dedication of the Morse students can be found here.