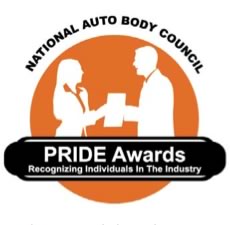 The National Auto Body Council (NABC) announced the winners of the 16th annual 2011 Pride Awards, the cornerstone of NABC’s mission to create positive public awareness of the collision repair industry and an institution with a legacy almost as long as NABC itself. The honors were bestowed at the Collision Industry Achievement Luncheon in Las Vegas on Wednesday, Nov. 2 in conjunction with the SEMA Show.

The accomplishments of the recipients are as diverse as they are inspiring, NABC noted:

One afternoon while out running errands, Jordan Hendler saw a teenage girl on a freeway overpass. She looked like she was going to jump. Jordan called 911 and started walking toward her. She and another Good Samaritan started to pull the teenager off the bridge, but the girl fought back, hysterical, struggling with Jordan to free herself. Almost four minutes later — an eternity when you’re wrestling with someone determined to commit suicide — the police and ambulance arrived, and the girl was safe thanks to Jordan’s unwavering efforts.

"I can’t explain exactly what gave me the strength and the will to do it," Jordan says. "I hope that young girl gets some help so that whatever is burdening her can pass."

It was about 10:30 at night when Joe Gloar dropped off his last load of windshields for Safelite Auto Glass in Waterloo, Iowa. Joe was heading home to Davenport when a sport utility vehicle broadsided his truck, hitting it so hard it flipped and skidded upside down into a building. In the meantime, the SUV caught fire. Joe unbuckled his seat belt, climbed out of his truck and ran to the SUV. He saw that the driver lay dazed and still. Joe threw open the door, unbuckled the driver’s seat belt and pulled him out. Seconds later, the SUV burst into flames. The driver was safe thanks to Joe.

A student of collision repair at Wiregrass Georgia Technical College, Jessica Anderson is a Skills USA participant who decided she wanted to use her collision training to help people. She knew there were always students in need of affordable, reliable transportation and saw plenty of cars in the area just waiting to be fixed. Utilizing the resources at her school, she brought a car in need of repair to the mechanical department for safety inspections, then she and her team of dedicated students and instructors finished the collision repair work. That project went to a fulltime criminal justice student with a family of four, previously without transportation. This is to be the first in series of reconstructed vehicles that will be donated to students recommended by their instructor. Jessica is working with her own instructor, Mark Tilson, to procure more cars and expand the program into the community.

Derek Willemson owns Micherner Auto Body in Kentbridge, Ontario, Canada. His shop is at the crossroads of Longwoods Road and Kentbridge Road, an intersection notorious for bad accidents. Last August, he heard a horrific crash while working in his shop. Derek looked out and saw a truck straddling a car in the intersection, engulfed in flames. He ran to help and despite being surrounded by fire, pulled a man and a woman from the back seat. The woman’s leg was caught between the door and the front seat. Derek ripped the rear door off to get her out.

"I just knew I had to get those people out of the car," Derek told the police. "The people in the front seat; they were not moving."

Derek has begun to work with Kentbridge Township as an active advocate for better traffic control at the intersection.

For Richard Henegar Jr., Quality Paint and Body in Roanoke, Va., is the family business. His best friend, Jason Clary, was deployed to Afghanistan with the 82nd Airborne. Jason left his truck at Quality for a tune-up. Jr. knew Jason always helped people and never asked for anything in return, so Jr. decided to do something nice for him. With help from friends and vendors, he performed an interior and exterior restoration of Jason’s car, including the sound system. They painted the bottom of the truck gold pearl, and the top black, a re-creation of the Afghan desert environment. The rear truck box wall was painted like a rock climbing wall, a passion the two friends share. When Jason came home, Jr. organized a surprise party at the shop covered by a local television station. It was a tearful welcome for a brave warrior.