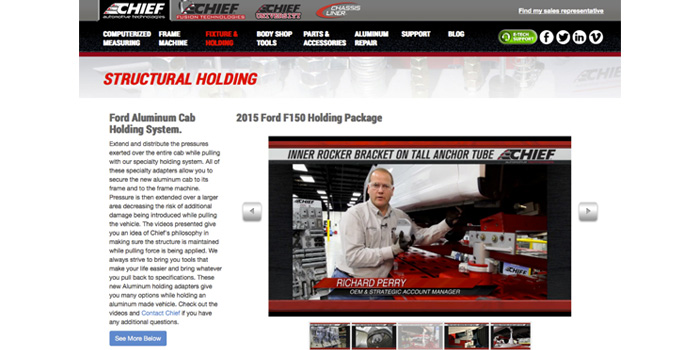 The videos are part of Chief’s structural holding how-to series, and cover the components included in its F-150 aluminum cab holding system.

Chief announced it has developed six videos that show how to properly secure the new Ford F-150 to a frame rack for pulling or sectioning. The videos are part of Chief’s structural holding how-to series, and cover the components included in its F-150 aluminum cab holding system (P/N 30002). They can be viewed by clicking here and on Chief’s video library page.

“Using Chief’s F-150 holding system, technicians can anchor the new aluminum-bodied truck in up to 10 locations,” says Richard Perry, Chief OEM and strategic account sales manager and host of the videos. “This helps to distribute pulling pressure evenly, which reduces the chance that additional damage will be inflicted into the body during the repair. Multiple holding points are also needed to secure the vehicle during sectioning to ensure it does not shift out of place. The new videos show how easy it is to use Chief’s holding system to create these anchoring points.”

The videos include demonstrations of how to temporarily replace the F-150’s rubber cab mounts with rigid mounts. This locks the cab to the frame, preventing it from flexing during the repair. Additional videos show how to position anchoring points along the F-150’s cab flange, and how to use the truck’s running board mounts to create a holding point that will leave no marks on the vehicle’s exterior. Chief’s new video series also includes a video that shows how to set up the Universal Structural Holding (USH) Clamp System, which enables technicians to use the Structural Holding Package on frame racks with non-rectangular tie-downs.