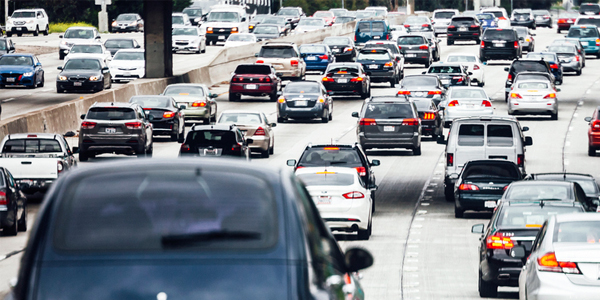 Study says by 2040, vehicle miles traveled will have grown to an all-time high of around 11 billion miles per year (a 65 percent increase since 2017) in China, Europe, India and the U.S., and sales growth of new light-duty vehicles will slow substantially.

The new major research initiative states that the automotive future will be different – though with some noticeable similarities – as the convergence of disruptive technologies, government policies and new business models usher in a new era of multidimensional competition.

A shift from buying cars to buying “mobility” will be a driving force of change in the automotive future, the study says. By 2040, vehicle miles traveled (VMT) will have grown to an all-time high of around 11 billion miles per year (a 65 percent increase since 2017) in China, Europe, India and the U.S. – the key markets examined for the study – and will keep growing. At the same time, sales growth of new light-duty vehicles will slow substantially.

The findings are part of Reinventing the Wheel, a major new multi-client, scenarios-based research initiative by IHS Markit that combines the expertise of the company’s energy, automotive and chemical teams to provide a first-of-its-kind, system-wide analysis of the new reality of transportation. The project focuses on the world’s largest automotive markets: the U.S., Europe and China. It also covers India, a large and fast-growing market. 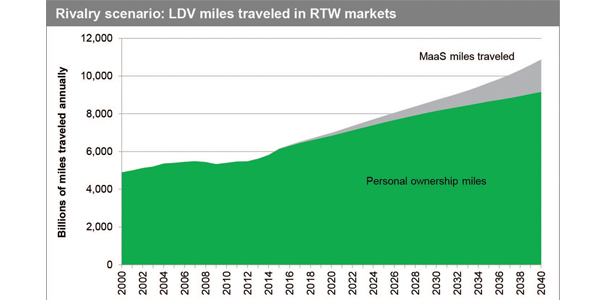 The competition between the internal combustion engine and electric vehicles, the disruptive force of “mobility-as-a-service” (MaaS) – such as ride-hailing – and the much-anticipated emergence of autonomous vehicles will lead to more profound changes in personal transportation than experienced over the past century combined, the study says.

“A great ‘automotive paradox’ – where more travel via car than ever, but fewer cars will be needed by individuals – will be a defining quality of the new automotive future,” said Daniel Yergin, IHS Markit vice chairman, Pulitzer Prize winner and project chairman. “The shift is just beginning. By 2040, the changes in transportation will be accelerating in a way that will be visible on roads and highways around the world. The pace and degree of this dynamic shift will have significant implications for industry, for public transportation systems and for how people get to work and live their lives – and spend their money on transport.”

Added Jim Burkhard, vice president, global energy markets and mobility, “We could very well be on the cusp of the greatest transformation in personal transportation since the dawn of the automotive age. Understanding the implications of such a transformation requires a broad perspective that goes beyond any single industry or market.”

The continued emergence of MaaS providers will be among the most important and disruptive forces in the future, the study says. The MaaS industry is expected to purchase more than 10 million cars in the study’s key markets in 2040 – compared to just 300,000 in 2017.

“Mobility service companies will be a prime driver of shifting car sales from personal to fleet economics,” said Tom De Vleesschauwer, transport and mobility practice leader, IHS Markit. “Ride hailing has the potential to be so disruptive because it is often the most convenient for consumers and can significantly increase access to car transport, particularly in markets with low car ownership rates.”

Oil’s monopoly as a transport fuel will erode, though it will remain a major part of the automotive landscape, the study says. Market share for cars primarily powered by gasoline and diesel will still account for 62 percent of new cars in 2040 in the four major key markets (down from 98 percent in 2016) with a total of 54 million new vehicle sales in 2040, according to the study’s baseline scenario. In this scenario, global oil demand still rises from 98 mbd today to 115 mbd in 2040 (the study also explores a more radical scenario in which oil demand in 2040 is less than it is today). 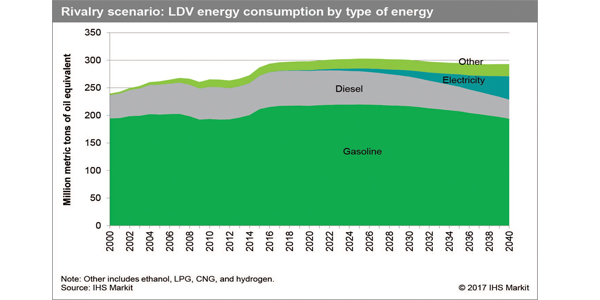 The dominance of the full internal combustion engine (ICE) will slide away, the study says. ICE vehicles still comprise a majority of new car sales in 2040 – buoyed by sales of mild to full hybrids, which still primarily rely on internal combustion engines. However, cars powered solely by gasoline or diesel will have fallen below 50 percent of new cars sales by 2031.

Higher fuel economy and emissions standards and the reduction in gasoline’s share of new vehicle sales will lead to a decline in aggregate gasoline demand in key markets during the 2020s, the study says, even though overall oil demand will rise.

“Oil’s monopoly as a transport fuel will erode as a new era of multidimensional competition takes hold – but it will remain a major player,” Burkhard said. “Many of its advantages as a fuel, such as its high energy density, will persist. And the size of the current automotive ecosystem will moderate the pace of change.”

Electric vehicles (EVs) will account for more than 30 percent of new cars sold in key automotive markets examined for the study by 2040 – up from just 1 percent of new car sales in 2016. A key tipping point will be battery pack costs, which are expected to decline to a price point in the 2030s that will make EVs cost competitive with internal combustion engine vehicles, the study says.

Autonomous vehicles are also expected to emerge as a significant share of new vehicle sales after 2030, the study finds.

“It’s not only a matter of technology,” said Yergin. “Political, regulatory, social and psychological barriers to adoption will also need to be overcome.”

Mobility-as-a-service companies are expected to be among the key adopters of electric and driverless cars with a shift towards buying their own fleets as opposed to drivers providing their own cars. The cheaper cost of electricity versus gasoline, easier maintenance from fewer moving parts and the ability to utilize centralized charging depots and networks for fleet-based transportation are among the factors expected to contribute to adoption of electric and autonomous vehicles for “mobility as a service.”

Reinventing the Wheel also examines the impacts of the new automotive future on important industries such as chemicals and electric power. For chemicals, changes to the automotive ecosystem will deeply impact what is a major market for the industry, affect the availability of feedstocks and have critical implications for investments and competitive strategy.

“The move from ICEs to EVs offers one example of the big impacts that will result from coming changes in the automotive industry,” said Anthony Palmer, vice president, chemical consulting for IHS Markit. “The growth of EVs as a share of new vehicle sales means decreases in demand for chemicals and plastics materials traditionally used in “under-the-hood” applications, including engineering plastics, that can withstand high temperatures, as well as for commodity plastics, used in gasoline tanks. But the transition to EVs also means new opportunities for chemical companies, which are preparing for the changes by investing significantly in future production for battery materials.”

The change in the use of liquid transportation fuels, as the automotive industry moves toward EVs, will also affect the chemical industry, Palmer said. “As the demand for gasoline and diesel fuel used in light-duty vehicles weakens, more refinery products will be available to serve as chemical feedstocks. Such a shift would encourage investment in naphtha crackers in the growing Asian demand centers, including China and India.”

Though the coming decades will be a transformative period for the automotive future, the sheer scale of the current automotive ecosystem will serve as a moderating influence on the pace of change, the study says.

“The automotive future will be defined by transformation unlike anything we’ve seen since the dawn of the automotive age,” said Tom De Vleesschauwer. “Still our analysis shows that there will be much that looks familiar, even in 2040. The majority of new cars sold and miles traveled will be in vehicles purchased for personal use. And a large share of those will have internal combustion engines that run on refined crude products. But the future of automotive transport will be an era defined by multidimensional competition. And the changes that future brings about will be profound and permanent.”