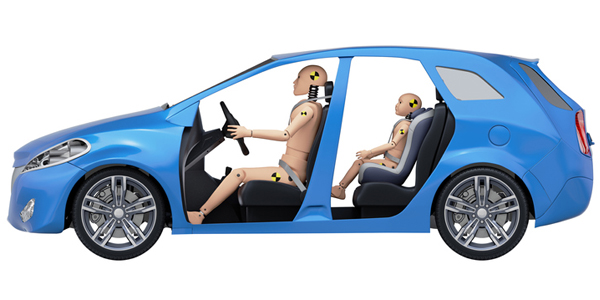 A new IIHS study of frontal crashes in which belted rear-seat passengers were killed or seriously injured suggests that more sophisticated restraint systems are needed in the back.

A new Insurance Institute for Highway Safety (IIHS) study of frontal crashes in which belted rear-seat passengers were killed or seriously injured suggests that more sophisticated restraint systems are needed in the back.

Front-seat occupants have benefited greatly from advancements in restraints – the umbrella term for airbags and seat belts, which work together during a crash to keep a person in the proper position and manage forces on the body. Back-seat occupants haven’t benefited from this technology to the same extent, says IIHS.

IIHS first looked at rear-seat injuries and fatalities in 2014. Failing to buckle up was a big factor, but many older adults and children over age nine suffered injuries even when belted.

The new study takes a closer look at the specific types of injuries belted back-seat passengers age six or older sustained in front crashes. IIHS is using the information to develop a new front crash test that will evaluate occupant protection in the rear as well as the front. The Institute is currently conducting a series of research crash tests as part of this project.

“Manufacturers have put a lot of work into improving protection for drivers and front-seat passengers,” said David Harkey, president of IIHS. “Our moderate overlap front crash test and, more recently, our driver-side and passenger-side small overlap front tests are a big reason why. We hope a new evaluation will spur similar progress in the back seat.”

As soon as a frontal collision starts, seat belts in the front seat tighten around the occupants, thanks to embedded devices called crash tensioners. At the same time, the front airbags deploy within a fraction of a second. Depending on the crash configuration, the side airbags may deploy too.

The tightened belts and deployed airbags keep the front-seat occupants safely away from the steering wheel, instrument panel and other structure when the vehicle stops abruptly, even if the force of the crash pushes that structure inward. To reduce the risk of chest injuries, these belts also have force limiters, which allow some webbing to spool out before forces from the belt get too high.

In the rear seat, side airbags protect passengers in a side crash, but there are no front airbags, and the seat belts generally lack crash tensioners and force limiters.

Although intruding structure is usually not an issue in the back seat during a frontal collision, crash forces can cause a back-seat passenger to collide with the vehicle interior. Seat belts can prevent that, but, as the new study shows, seat belts without force limiters can inflict chest injuries.

For the study, IIHS researchers used two national databases to find 117 crashes in which rear-seat occupants were killed or seriously injured. The most common type of injury, found in 22 of the injured occupants and 17 of the 37 fatalities with documented injuries, was to the chest.

Of the fatal cases, most were considered survivable, meaning there was sufficient space in the vehicle for the passenger after the crash. This contrasts with a 2003 IIHS study of fatally injured children in child restraints. In that study, the crashes in which child restraints were properly used were generally unsurvivable.

“Child restraints are so effective that when young children in properly used restraints die, it’s usually because the crash was so severe that improving the restraints wouldn’t have made a difference,” said Jessica Jermakian, senior research engineer at IIHS and the lead author of the new paper. “The fact that our sample had mostly survivable crashes tells us that we need to do a better job restraining adults and older children in the back seat.”

In many of the cases in the new study, the back-seat passengers were injured more severely than the front-seat occupants, suggesting the restraints in the rear didn’t perform as well as the ones in the front.

Using information in the case records – including things like photographs, police and medical records, and crash investigation and autopsy reports – the researchers determined that the rear-seat chest injuries were mostly due to excessive forces from the shoulder belt.

Force limiters like the ones in the front seat would be one way to reduce belt injuries, says IIHS. Another possible solution is an inflatable seat belt of the type introduced by Ford and Mercedes-Benz. These belts inflate in a crash to better distribute forces across the torso and chest.

Head injuries were the second-most common injury type in the study. They were present in nine injured passengers and 18 fatalities.

Many of the fatal head injuries occurred in crashes considered unsurvivable. In some nonfatal crashes, passengers hit their heads against the vehicle interior, but researchers couldn’t confirm any such incidents in the fatal cases, which generally had less detailed information about injuries.

Still, IIHS says, head injuries are a concern, so it’s important that anything done to reduce forces on the chest doesn’t raise the danger that the passenger’s head moves too far forward. Too much forward movement could allow a passenger’s head to come into contact with the front seatback or other parts of the vehicle interior.

Manufacturers might also find a way to equip rear seats with frontal airbags – for example, deploying from the roof – but so far that hasn’t been done in any production vehicle.

IIHS isn’t prescribing a particular solution for the back seat. Instead, the Institute believes a crash test that evaluates rear-seat protection will prompt automakers to figure out what combination of technologies works best.

“We’re confident that vehicle manufacturers can find a way to solve this puzzle in the back seat just as they were able to do in the front,” said Harkey.

Advertisement
In this article:airbags, iihs, insurance institute for highway safety