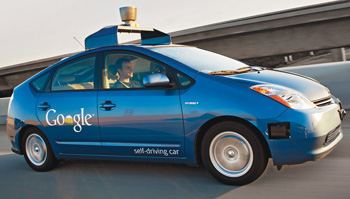 By now, most everyone has heard that Google has developed an autonomous, self-driving vehicle and has been testing it out. This concept, plus automakers’ increasing introduction of crash avoidance technology into vehicles, has some collision repairers nervously wondering what business implications this could have in the future.

Aside from the fact that the National Highway Traffic Safety Administration has said it will be 2050 before all vehicles on the road have crash avoidance technology,  new rules from the California Department of Motor Vehicles should also put repairers at ease…at least for now.

The rules, which take effect on Sept. 16, 2014, require a driver to be able to take “immediate physical control” of a vehicle on public roads if needed. This would not be possible in Google’s car as it has no steering wheel or pedals for braking and accelerating. But Google says it does intend to comply with the law, according to an article in the Wall Street Journal. Still, these new laws could put a crimp in Google’s plans to get the car on public roadways anytime soon.

Read the full article in the Wall Street Journal