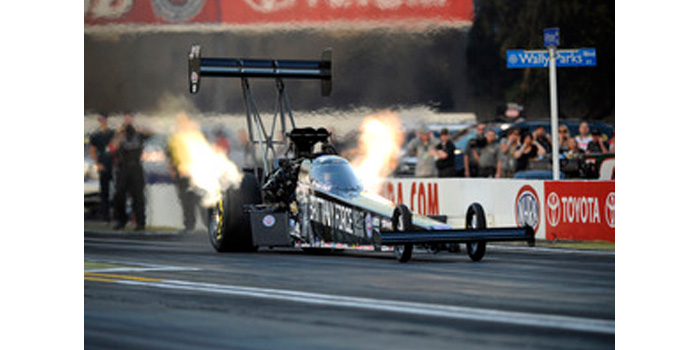 PPG will be the gold sponsor of the Celebration of Excellence, where John and Brittany will address the audience prior to the recognition of AMI graduates.

NHRA Funny Car Champion John Force and NHRA top fuel racer Brittany Force will be the keynote speakers at the ASA Celebration of Excellence during NACE | CARS 2015 in Detroit, Mich. This event will take place at the GM Heritage Museum the evening of Wednesday, July 22.

John Force is a 16-time NHRA Funny Car champion and an 18-time champion car owner. He is the most successful driver in funny car history with 142 wins to his credit as of press time. In addition to racing his own car, he also owns and manages a team of four cars including two driven by his daughters, Brittany and Courtney.

Brittany Force finished the 2013 NHRA season as rookie of the year. In 2014 she raced her 10,000-horsepower top-fuel dragster to 10th in the NHRA point standings. She is currently eighth in points after the first few races of the 2015 season.

PPG will be the gold sponsor of the Celebration of Excellence, where John and Brittany will address the audience prior to the recognition of AMI graduates. Following their talk, they will greet attendees and sign autographs. Attendees will also have the opportunity to view the many rare cars in the museum’s private collection.

Dan Risley, ASA president and executive director, stated, “ASA and PPG are excited to announce John Force and his daughter Brittany as keynote speakers for the AMI Celebration of Excellence. Graduates of the program worked hard to obtain this level of certification and recognition. John Force appreciates hard work as he owns and manages a four-car championship race team and continues to drive, and win. We are proud to work with our industry partners at PPG to bring this caliber of speakers to NACE | CARS 2015. ”

Registration for NACE | CARS, including all educational sessions, is now open at www.NACEexpo.com or www.CARSevent.com. Other events taking place during “Industry Week” in Detroit, July 21-25, include:

Advertisement
In this article:NACE | Cars, ppg