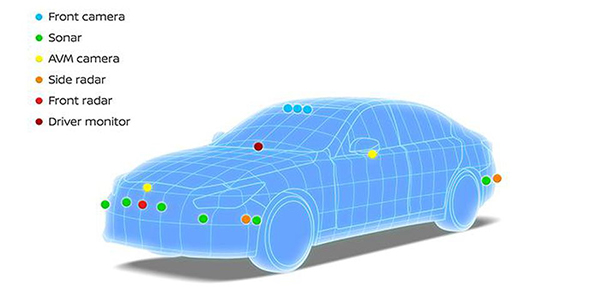 Nissan and Nio are the latest automakers to join the market of hands-off driver-assist systems.

Nissan and Nio are the latest automakers to join the market of hands-off driver-assist systems. Both automakers have recently announced that drivers will be able to go hands-off while still keeping an eye on the road after the companies leveraged the EyeQ4 vision system from Intel subsidiary Mobileye, according to an article by Forbes.

EyeQ4 debuted in 2018 and is also used in vehicles from several European manufacturers. At 2.5 trillion operations per second, it has eight times the processing power of the EyeQ3 system used in the majority of camera-equipped cars on the road today. That’s more than the capability of the Tesla AutoPilot V2 computer, although it falls well short of the V3 hardware that Tesla claims to be using in cars being built currently. Cars with EyeQ4 are also the first to support Mobileye’s Road Experience Management (REM) system for crowdsourcing high-definition maps. Mobileye expects to equip more than 20 million vehicles with EyeQ4-based ADAS over the next several years, according to the article.

When REM-enabled vehicles drive down the road, the view from cameras is compared to an existing map and, when new static features appear or change, that information is relayed back to Mobileye’s servers to update the maps. Mobileye has deals to supply Here and other mapping companies with data, but it’s also providing its own map system called Roadbook to Nissan. Vehicles like the updated Nissan Skyline will use Mobileye’s Roadbook HD map system to help with localization and navigation, according to the article.

The ProPilot 2.0 system that will be available in the Skyline brings Nissan’s driver assist up to a standard similar to GM’s SuperCruise. In combination with radar sensors around the vehicle like SuperCruise, it will enable hands-off lane centering, according to the article.

It can also alert the driver of safe lane change opportunities and execute them when the driver puts their hands on the wheel and taps a switch. Like SuperCruise, ProPilot 2.0 is limited to use on divided highways, according to the article.

Also like the GM system, ProPilot 2.0 uses an infrared camera watching the driver to ensure they are watching the road. If the driver diverts attention or fails to respond, the system will bring the vehicle to a safe stop. This is a more robust approach than that used by most automakers of looking for steering wheel motion, according to the article.

Also in the EyeQ4 camp is Chinese electric vehicle startup Nio with an update to its Nio Pilot assist system. Nio started production in 2018 using the EyeQ4 hardware and it is now pushing out an over-the-air update to add functions to Nio Pilot like Highway Pilot, Traffic Jam Pilot and Auto Lane Changing. Nio hopes to launch its vehicles in the U.S. market in 2021, according to the article.