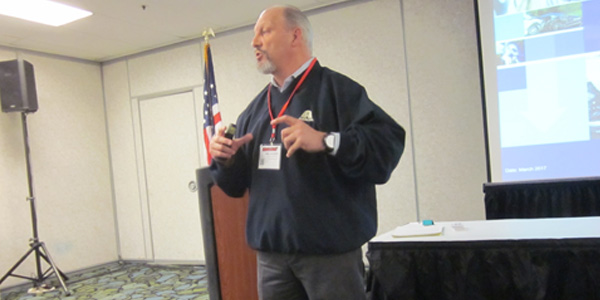 During the 2017 NORTHEAST Automotive Services Show, Mike Anderson offered a crash course on the art of negotiating with insurers.

“When an insurance company tells you ‘No,’ getting mad will not get you paid,” Mike Anderson said during a presentation at NORTHEAST 2017.

Google the word “negotiation” and you’ll see this definition: “Discussion aimed at reaching an agreement.” But in Mike Anderson’s experience, body shop owners have a much different interpretation.

“Most people I encounter view negotiations like this: On the outside, we’re shaking hands and saying, ‘How are you doing?’ And on the inside, we’re saying, ‘I want to punch that person in the face,’” Anderson told a standing-room-only audience at the 2017 NORTHEAST Automotive Services Show in Secaucus, N.J.

With that kind of attitude, is it any wonder that some shop owners and managers struggle to find common ground with insurers?

Anderson, a shop owner-turned-consultant who has become a rock star on the collision repair industry’s speaker circuit, gave attendees a crash course on the art of negotiating – imploring them to voice their approval with an “amen” when he emphasized a key point.

His first key point: When you’re negotiating with an insurer, “your opinion doesn’t mean jack.”

“The only thing that matters, ladies and gentlemen, is what you can prove, substantiate or justify,” Anderson added.

His second key point: When an insurer tells you that your shop is the only one that charges for something, “don’t take the bait.”

“Ladies and gentlemen, that is a negotiating tactic,” Anderson said.

Referencing the catch phrase from the 1950s TV series “Dragnet,” Anderson made a third major point: When negotiating with insurers, “stick to the facts.”

“I love you all, and I’m a collision repairer to the day I die, but our industry often likes to play victim,” Anderson asserted. “We like to blame other people for our stuff. At the end of the day, we have to accept personal responsibility. It starts with us being educated and knowledgeable.”

How do you stick to the facts and stay on point when you’re trying to justify each line on a repair plan? Anderson said it’s essential to answer (and provide supporting documentation for) these four questions:

Some audience members were surprised when Anderson revealed his source for the four questions.

“I wish I could say I thought of them, but they came right out of State Farm’s corporate training,” Anderson said. “That’s some [stuff] that Bill Belichick would be proud of.”

Anderson suggested that shop owners turn to these resources to show insurers that an operation is required to properly repair a vehicle:

Of all the resources on the list, Anderson emphasized that OEM repair procedures carry the most weight.

“In my career and in our ‘Who Pays for What?’ survey results, I’ve found that the absolute No. 1 way that shops say they’re able to prove something is required is the OEM procedures,” Anderson explained. “For example, Toyota has a bulletin that says it’s required for me to prep a raw bumper cover. Toyota has a bulletin that says I need to seam-seal a new door. OEM repair procedures are the No. 1 line of defense to justify what you need.”

Anderson offered a number of other resources that can help shop owners and managers answer the aforementioned questions and bolster their negotiating power:

Anderson spent a few minutes highlighting one resource: DEGweb.org, or the Database Enhancement Gateway, which is funded and maintained by the Alliance of Automotive Service Providers and the Society of Collision Repair Specialists.

The free website has several functions, Anderson noted. It allows shops to add missing parts or missing labor times to the estimating databases. Shops also can use the site to prove to an insurance company that an operation is not included.

In 2014, Anderson submitted a database inquiry stating that he was replacing the front grille on a 2006 Mazda Tribute, and there was no paint time for the grille in the estimating system. On the same day, DEG processed his inquiry and resolved the issue, and CCC added 1.6 hours to paint the grille.

“The scary part was that I submitted this question in 2014, and it was a 2006 Mazda,” Anderson added. “That means there were five or six years where there was no labor time in there. At the end of the day, I could’ve complained about how unfair life is and how CCC doesn’t have [the labor time] in there, but that doesn’t solve anything. It was only by accepting personal responsibility and taking action that I got the time added.”

Invariably, when a shop owner adds a new charge to an estimate, the insurance appraiser will respond by asking, “Why now?”

Before negotiating with an insurer, preparation is essential. Shop owners and managers should develop scripts, role-play with their team members and rehearse their presentations at least four times before meeting with the insurance carrier, Anderson said.

One final thought: Make sure you’re meeting with a decision maker.

“If you’re sending your people out in the trenches to go fight with a staff appraiser, they’re not going to get paid,” Anderson said.